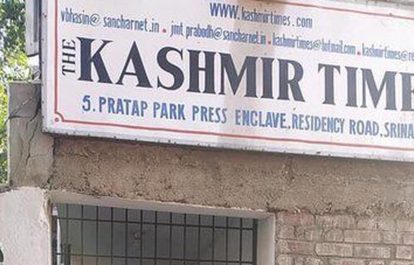 The Jammu and Kashmir administration shut down the Srinagar office of Kashmir Times, one of the leading English-language dailies in the Kashmir Valley, on October 19. The International Federation of Journalists (IFJ) and its Indian affiliates Indian Journalists Union (IJU) condemn the J&K administration’s move and urge to reverse the government’s decision.

According to the newspaper, the officials from estates department came to the office without any notice, asked its staffers to leave the building, locking the Srinagar Times office.

Anuradha Bhasin, the executive editor of the newspaper opines that the illegal shutdown is in retaliation of the critical stance the daily has taken about the government policies. Last week, she was forcibly evicted from her official residence in Jammu.

The J&K authorities stopped government advertising in the newspaper after Bhasin went to India’s Supreme Court in relation to the communications shutdown imposed on August 5, 2019 by Indian government in Jammu and Kashmir.

The state department however claims that following the death of Ved Bhasin, founder of the Kashmir Times and the father of the Anuradha Bhasin who died in 2015, the validity of the allotment expired. They argued that the quarter was allotted to Ved Bhasin in his individual capacity.

The IFJ said: “The J&K’s administration’s move is no more than an effort to silence  critical voices regarding government policies, programs and activities. The J&K government should reverse the move, stop the harassment of Anuradha Bhasin and support an environment that enables a free and independent journalism to thrive.”