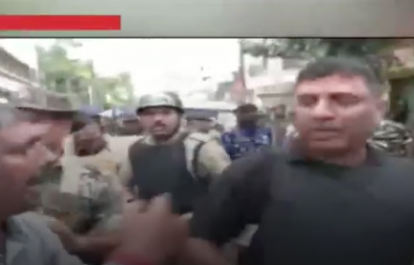 Senior police assaulted several journalists as they covered violent clashes in Barrackpore, a city in West Bengal, on Sunday, September 1. The International Federation of Journalists (IFJ) and its affiliate the National Union of Journalists (NUJ) in condemning the attack and demanded the police investigate the incident.

Following the clashes, the police then tried to enter the residence of Arjun Singh. Local reporters were present at the venue to cover the story. In the tense situation, the Deputy Comissioner of Police Barrackpore Ajay Thakur was caught on camera as he hit a  journalist. Several other journalists also said that they were assaulted at the same incident.

NUJ India will send a fact-finding committee and urge the state government to set up a high-level judicial committee to probe the incident and punish the guilty police officers for assaulting journalists. NUJ(I) also demand for the enactment of the Journalists Protection Act and call the authorities to ensure the security of the media persons, while covering different events in the states.

The IFJ said: “We condemn the assault against journalists. The perpetrators should not go unpunished. We call the authorities to take action on the attack. Journalists must be free and secure to report on issues. Journalists should not fear for their safety.”