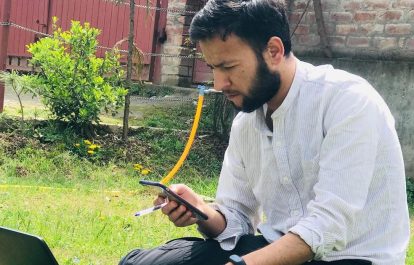 Sajad Gul, a trainee journalist affiliated with the Kashmir Walla, was arrested on January 5 and accused of disseminating false information via social media which promoted anti-government sentiment. The International Federation of Journalists (IFJ) and its India affiliate, the Indian Journalists Union (IJU), condemn the misuse of the law and urges for his immediate release.

Journalist Sajad Gul, 26, was arrested by security forces a day after he posted a protest video by a family of a Lashkar-e-Taiba (LeT) militant who was killed on January 3 in a security operation in Srinagar. Sajad Gul’s video-tweet on January 4 showed the family of the deceased militant, Salim Parray protesting against the killing.

According to Gul’s family member, he was arrested in an army raid at his house around 10:00 pm on January 5. The police publicly announced his arrest via a press release on January 8. The Press release accuses Gul of spreading “disinformation and false narratives” through different social media platforms in order to create “ill will” against the government.

According to the Police, a First Information Report (FIR) was filed against him for uploading ‘objectionable videos with anti-national slogans’ . Journalist Gul was charged under 120B (party to criminal conspiracy), 153B (imputations, assertions prejudicial to national integration), and 505B (fear or alarm to the public) sections of the Indian Penal Code (IPC).

Journalist Gul has  faced harassment for his news reports in the past. The editor-in-chief of The Kashmir Walla, Fa-had Shah reported that an FIR was registered against the journalist following his news report on a demolition drive in February 2021.

The arrest of journalist Gul has sparked criticism from civil society and the media fraternity. The Kashmir Press Club terms the arrest as an attempt to criminalise journalism and urged for Gul’s immediate release.

The IJU President, Geetartha Pathak, said: “The Indian Journalists Union (IJU) expresses serious concern at the arrest of journalist Sajjad Gul of Kashmir Walla and demand his immediate release and that all charges against Gul be dropped.  We urge authorities to create an environment conducive to professional and independent journalism in Kashmir, free from threats, summons and arrests.”

The IFJ said: “No reporter should be detained for reporting the facts as Gul did. We strongly urge the administration to immediately release the journalist and to ensure that no journalists are ever targeted for their free and independent reporting.”