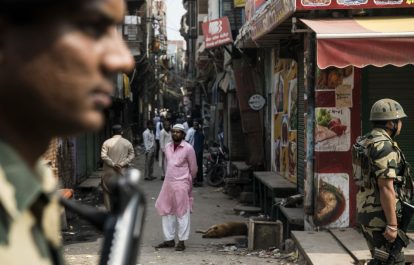 Malayalam-language news channels Asianet News and MediaOne received bans for alleged “bias” content covering the Delhi protests amidst the climbing death toll. The International Federation of Journalists and its affiliate the Indian Journalists Union (IJU) condemn the government censorship and implore the government to refrain from enforcing bans on the media.

India’s Ministry for Information and Broadcasting issued two orders on March 6 imposing a 48-hour ban, accusing the two outlets of reporting on the riots “in a manner that highlighted the attack on places of worship and siding towards particular community.” Despite the ministry claiming the coverage has the potential to “incite violence and pose danger to maintenance of law and order”; the ban was lifted within six hours. It is suspected the ban on the news outlets was a retaliation to Asianet News report on February 25, concerning the inaction of Delhi police despite escalating violence and MediaOne reporting on a phone conversation where an injured anti-Citizenship Amendment Act protestor (anti-CAA) was refused police assistance.

The root of the civil unrest, the Citizenship Amendment Act (CAA) was passed by the Parliament of India in December 2019, which anti-CAA protestors allege discriminates against Muslims fleeing persecution. The 2020 Delhi riots from February 23 and March 1 have left 43 people dead, with reports suggesting the death toll has risen to 53 and hundreds injured, including five injured journalists.

While the minister said he will look into the ban, the IJU said the minister “must remember that deeds and not words will give confidence to both the media and the people.” The IJU views “the ban as a brazen attack on press freedom and the citizen’s right to information.”

The IFJ said: “The ministry’s ban on media outlets inhibits the free flow of information and undermines the ability of citizens to hold governments. The IFJ urges the government to consider the implications of banning a media outlet and its consequences for democracy by refraining from media bans in the future.”