India: Shillong Times forced to shut down amid Covid-19 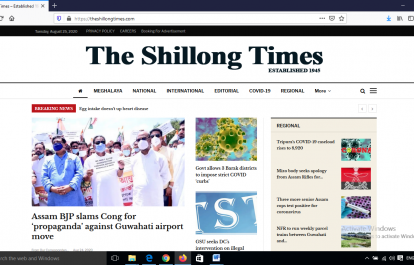 The Shillong Times, the oldest English broadsheet newspaper in northeast India, was temporarily shut down by the local administration on August 23 for allegedly violating Covid-19 health protocols. The International Federation of Journalists (IFJ) and its Indian affiliate the Indian journalists Union (IJU) are concerned by the government’s forced shutdown and urge the authorities to allow the media outlet to continue operations as an ‘essential services’.

The East Khasi Hills district administration of Meghalaya state imposed a 10 day shutdown of the newspaper after three of its staffers tested positive for the Covid-19. The administration, also accusing the newspaper of violating Covid-19 health protocols, sealed the newspaper premises and declared the newspaper’s office in Rilbong a containment area. The shutdown order, the first of its type in India, issued by the government outlined that the newspaper violated all protocols of social distancing, wearing of face masks and hand sanitization among others.

With the imposition of shutdown, the Shillong Times is not seen on the newsstands for the first time of its 75 years history.

The newspaper’s management however notes that their voice being ‘stifled at the cruel hands of the law’ as they had diligently adhered to Covid-19 protocols. The Shillong Times editor Patricia Mukhim accuses the government of issuing the order without conducting a proper and objective inspection of the building and the activities of the Shillong Times staffers. Manas Chaudhuri, the newspaper’s owner and former editor, accuses the government’s decision of being “presumptuous.”

The IJU Secretary General Sabina Inderjit said: “The ad-hoc order to close the newspaper sends wrong message to public. The authorities should have discussed the issue with the newspaper’s management before. Therefore, the IJU urges authorities to heed to the newspaper’s request to allow continue its operation.”

The IFJ said: “The abrupt closure notice by the administration is a violation of press freedom and the rights of workers. We urge authorities to withdraw the order and allow the newspaper continue its operation while maintaining adherence to Covid-19 health protocols and safety measures.”