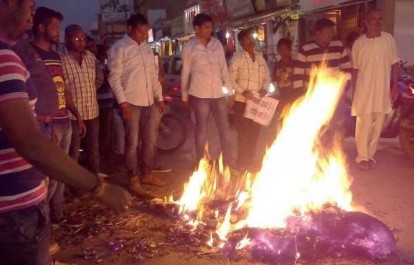 The International Federation of Journalists (IFJ) joins its affiliate the National Union of Journalists (India) in condemning the attack on journalist Malini Subramaniam in Bastar, Chhattisgarh, India on Sunday, February 7. The IFJ is outraged by the attack and demand immediate action from the local government to guarantee the safety of Subramaniam and the local media community.

On Sunday evening, a group of 20 people gathered in front of Malini Subramniam’s residence, a correspondent of the independent English-language news site Scroll.in. The mob shouted abusive slogans including ‘death to Malini Subramaniam’, as well as pelting rocks at her home, which shattered her car windows. The mob tried to encourage her neighbours to attack her, claiming she was a Maoist supporter.

In an interview with Scoll.in following the attack, Subramaniam said that she recognized two of the men in the group who belong to political parties in the state, as well as other men from the crowd who are members of the anti-Maoist group Samajik Ekta Manch. The police initially denied to file the First Information Report (FIR) and didn’t initiate an investigation into the incident until Wednesday, February 10. Subramaniam was told by officers that her case was very weak.

This recent attack came after Subramaniam published a number of articles about human rights violations in the state, and previously she has been attacked for publishing similar reports. In month leading up this recent attack, police officials have repeatedly come to Subramaniam’s house to interrogate her about her reporting.

The NUJ(I) said: “We request the Chhattisgarh government to immediately look into the matter on high priority. The NUJI urge the Chief Minister Raman Singh to take strict action against those who are involved in the case.”

Various media rights organizations including the Network of Women in Media India (NWMI) have condemned the attack. The NWMI said in a statement: “This incident, the indifference of the police and the state administration is a dangerous portent for freedom of expression and for the safety and security of media persons in particular and citizens in general.”

The IFJ said: “The IFJ is outraged by the attack on Malini Subramaniam and condemn the actions of those involved. Attacks such as these are a blatant attempt to stifle press freedom and intimidate the media. We join NUJ(I) in demanding the Chhattisgarh government immediately investigate the attack and preserve the safety of the media community. The government must take a stand that these attacks on the media are unacceptable in Chhattisgarh.”

Earlier this year, the IFJ was part of an international coalition that called for the release of two Chhattisgarh journalists, Santosh Yadav and Somaru Nag, who were arrested on charges of aiding Maoists and remain in the jail without charge sheets. An online petition has been launched urge the Chief Minister Raman Singh to demand immediate intervention to the serious threat to life of journalist Malini Subramaniam.

Photo: Malini Subramaniam was sent this image during the attack, depicting an effigy of Naxalites and their supporters being burned. Credit: Scroll.in