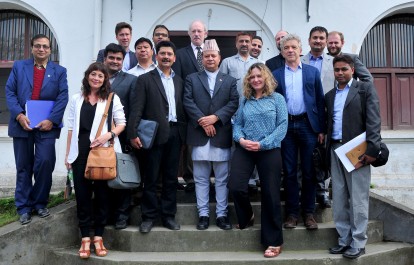 The report came ten months after the NIMP including members from the IFJ, AMARC, Article 19, Centre for Law and Democracy, Committee to Protect Journalists, International Media Support, Open Society Foundation, Reporters sans Frontières, SAMSN and UNESCO, took part in a 6-day mission hosted by IFJ affiliate, FNJ. The mission went to Nepal to assess the media freedom situation in the country, with the aim to expand the space for freedom of expression and express solidarity with the local media community. During the mission, the NIMP held meetings with government officials, policy makers, NHRC officials and consultants, media stakeholders and local media.

Among the key recommendations in the report, specific recommendations regarding safety and impunity aim to improve the situation facing Nepal’s media. The recommendations call for effective steps to resolve all serious cases of attacks on journalists, the implementation of the Working Journalist Act, the development of ethical guidelines and professional standards and protection measures for all media staff.

The NIMP report also called for the development of a safety mechanism based at the NHRC, tailoring to the specific situation and needs of Nepal. The mechanism should be developed through consultation with key media groups and stakeholders, and adequate resources must be allocated to ensure that it can discharge its mandate effectively. The mechanism also needs to provide rapid protection and measures against impunity and it must be comprehensive in its coverage of journalists, human rights defenders and others attacked for exercising their right to freedom of expression.

The need for the safety mechanism has been long-coming in Nepal. During the decade-long Maoist insurgency, the safety of journalist was at a record low in Nepal with attacks, disappearances and deaths. A number of journalists were killed or disappeared with little to no action from authorities, making impunity another key issue. While there have been significant improvements in recent years, NIMP notes that both journalists and media employees share concerns about safety, but many media organisations have failed to put in place adequate systems despite clear vulnerabilities.

The safety situation for journalists has impacts beyond the simple security of the media community, with a strong correlation with positive overall working conditions for journalists. According to research, 54 percent of journalists do not receive their salaries on time, while FNJ estimates that nearly one-half of all journalists do not enjoy at least some of the other benefits required by the Act, such as insurance and long service leave. According to the NUJ and the Minimum Wage Fixation Committee there is an urgent need to implement a Working Journalist Act to improve both the overall safety and security, as well as job conditions.