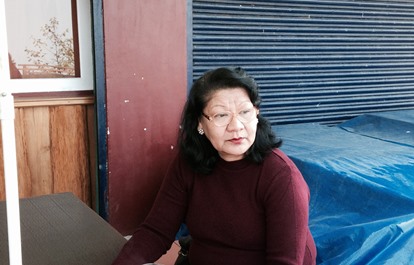 You have been one of the most prominent journalists from Nagaland and you are the only woman editor, proprietor and publisher in the North East of India. On a whole, it is reported that women only make up 2.7% of India’s local journalists. What do you have to say to people judging your success on the basis of your gender?

If any person limits herself himself to his or her gender, then I don’t think we can achieve anything. You have to first think of yourself as a person and say okay what can I do what myself, what can I achieve and create and what I can give to the society?
Once you start asking these questions you will find the answers within you and you will also notice that there are lot of barriers you have to cross. In any social construct, society would have you be the woman that you are. You have to say I am much more. You have to connect to the person that you are and respect your personhood.

Having been in the media industry for a long time, can you reflect on the changes that you have come across?

There have been changes no doubt but things have remained quite constant. As a journalist from Nagaland, which is known as a conflict ridden state, that would be the normal thing that people ask you and you say ‘yeah we did have problems’. Media houses, editor, reporters’ and staff faced a lot of problems, threats and intimidation which I can’t say have stopped. It’s just that things are done in a more subtle and sophisticated way now. Then there is the problem of human resource. We don’t have trained journalists. It’s not just then it’s even now.

I myself have no training. I have learned on the job, so to speak, but the problem is journalists are also products of society and here (in Nagaland) specifically, of our education system. In the 80s we had journalists who wrote well but today we have journalists who are simply noting down whoever says whatever and just filing their reports. There is no analysis. The language is much to be desired and nobody is taking up the trouble to read, to learn. There’s nothing in-depth and it’s amazing that this should be happening now when journalists have got technology in their hand, that things are so much more convenient and comfortable than as compared to our days but then this also is a reflection of the degradation of the education system.

What can you tell us about the journalists’ unions in Nagaland?

We have this problem of rivalry among the newspapers. Things changed in the late 80s and rivalry took a very different turn. I think that’s when the seeds of animosity were sown and consequently even now we don’t have a strong media community in Nagaland. Because of that we have not been able to get all the rights that journalists are supposed to get from the state government. This is a pity that it should happen to our journalist community. We have press clubs but the overall is the press association of Nagaland. It’s there when it’s there and it’s not there when it’s not there. Need I say more?

Nagaland is known as a conflict area but our conflict is not so much in terms of war but with the social and political groups prevalent within the tribes and clans. Do you think journalists’ tackling Nagaland have matured to tackle these issues?

I wouldn’t say no and I wouldn’t say yes. Some people who have done research and have taken the trouble to learn are beginning to understand that there are so many layers to this conflict we are talking about. We use the terms war and conflict very broadly, sometimes from a very narrow perspective but as a Naga, if I have to look at the conflict that we are identified with, that we have, there are 2 aspects to it very broadly. One is between the Nagas, the groups and the government of India and one is among ourselves. Nobody will deny that we are not united ideologically. We all have different perspectives on the conflict and because of that, we have different perspectives on how to resolve the conflict.

What hopes do you have for the future of journalists’/journalism in Nagaland?

I hope that sometime in a few years we will have younger people who will feel the need to provoke the thoughts of our own people take up the profession and they are serious. But this at not happen immediately, but again I don’t want to have too many illusions in the sense that, I’ve been writing for the past 30 years. It just doesn’t seem to be making any dent with the government nor with the people. So I wouldn’t be surprised if young Naga journalists say ‘why do I need to work here, let me go work with the Times Of India or the London Times’. And why not? Of course it’s very competitive outside but there’s nothing wrong with competition. If our young Naga people think we are as good as anybody, why not? So hope, maybe after a few years.

Nagaland has unfortunately been highlighted in the news due to the March 5 lynching incident. Having this happen in a place that you call home, is it possible to detach from that personal connection and continue with objective reporting?

Yes why not? It is possible. I can tell you that two very senior government officials rang up and told my assistant editor and senior reporters that they found our reporting to be the most correct and objective. My newspaper is very small, but we do have the reputation of being very objective and impartial. It is what we are supposed to do as journalists otherwise we have no business to be in this profession.

Why do you think that this rape case led to the March 5 incident? There have been rape cases recorded before in Nagaland but what made this case so different?

I think there are several factors. One of them would be political. Some political group(s) could have thought of this as an opportunity to destabilise the government. Then the tribal issue comes in. Perhaps it is a very subconscious, unconscious way of asserting our identity. But it is surprising every time there are reports alleged rapes the people take it for granted that it is rape. And in this particular situation, rape is yet to be proved. I think there was a whipping up of frenzy. Look at what has been happening in Nagaland the past 10-20 years. No governance, no rule of law. There’s no leadership, there’s no political leadership, there’s no social leadership, there’s no cultural leadership, there’s no leadership of the church. There’s no value system anymore; there’s no rule of law. So perhaps the frustration level of the people have been rising and this was some kind of opportunity to vent their frustrating, little realising today we no longer live in grand isolation as our forefathers did.

Can you comment on the digital presence of Nagaland?

We’ve proved to be slaves of technology not the master. If you look at the kind and quality of discourse on social media like the ones pertaining to Nagaland, I say what a waste of technology. Then again in Nagaland, how many people have access?
It’s all very fine to sit down in the comforts of your room and get into heavy social media activism, write about this issue, that issue and all that.

Of course a few years ago that first Against Corruption and Unabated Taxation (ACAUT movement) drew a big crowd but otherwise it has not made much difference in bringing down the level of corruption or creating a value system in the society. We had a lot of clean election campaigns and people were saying a lot of things on social media but the last elections that we had went on pretty much the same as all the other elections.

Since its inception, Nagaland Page upholds a reputation for not holding back and swinging the punches when necessary. Can you comment?

I cannot afford a big size paper. Even colour is too expensive for me. My paper is meant for people who read and at the end of the day, what you read will always come out in black and white. My paper is for the discerning reader and the focus has always been developmental journalism.

Monalisa Changkija is the only woman editor, publisher and proprietor of ‘Nagaland Page’ a daily newspaper in the Northeast of India. She was also the joint winner of the 2009 Chameli Devi Jain Award for an Outstanding Woman Mediaperson.