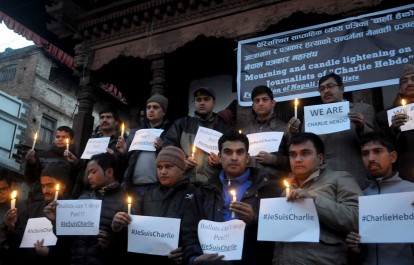 Media unions and press freedom groups from across the Asia-Pacific today joined the International Federation of Journalists (IFJ) in a regional show of solidarity and joint condemnation of the horrific attack that took the lives of 10 media workers in France this week.

Around the world, the IFJ’s global network has reacted strongly to the massacre at French satirical magazine Charlie Hebdo, with vigils and public rallies happening across the region.

Today, in their messages of support, Asia-Pacific journalists and their trade union condemned the outrageous attack and gave support to their French colleagues. Their messages reinforce the need for media to stand together against the threats and killings that seek to intimidate journalists and destroy freedom of expression and democracy around the world.

The IFJ Asia-Pacific acting director, Jane Worthington, said: “We stand together with heavy hearts to offer our condolences to our brave French colleagues and their families who are suffering so terribly right now. This intolerable attack is a violent reminder of the challenges that journalists across the globe face every day in doing their jobs.”

On January 7 at 11.30am, two armed men stormed the offices of French magazine, Charlie Hebdo and killed 10 staff, 2 police officers and injured 11 others. The gunmen then fled the scene and remain-at-large. A third suspect has since handed himself into police.

Charlie Hebdo is a French satirical weekly, renowned for its controversial cartoons and commentary on current affairs. The magazine was most recently attacked in 2011, with its office firebombed following the publication of the magazine, edited by the Prophet Muhammad. Charlie Hebdo editor, Stephane Charbonnier who was among those killed in the attack was under police protection following g a number of threats against his life. In 2011 Charbonnier said in response to the threats, “I would rather die standing than live on my knees.”

The attack in France has come as a stark reminder of the challenges that journalists face across the world. On the same day that 10 media workers were killed in France, the first Asia Pacific journalist was also murdered. Nerlita Ledesma, a 48-year-old journalist from Bataan in the central Philippines was shot multiple times as she waited for a ride to work.

Jane Worthington said: “The Asia-Pacific is the deadliest region in the world for journalists and our colleagues here are acutely aware of that reality. But what is clear is that we will not be silenced through fear. We continue to fight for the right to freedom of expression. Journalists will continue to defend that right every day. Today and every day forward we are all Charlie Hebdo.”

The latest IFJ reports show 2015 is continuing on from a dire year for journalist killings. In 2014, 118 journalists across the world were murdered. An increase of 13 from the previous year, and the Asia Pacific region topped the global list with 35 murders. Pakistan is the most dangerous country globally, with 14 journalist killed in 2014.

The list in process below includes sincere tributes from journalist associations, unions and press freedom groups from across the South Asia, for the victims, their families and France.

The DUJ expresses profound shock at this unprecedented attack on the media which has shocked the entire world. The brutal killings are a direct attack on the right to free expression and a free media. At the same time the DUJ does not in any way support the right to publish matter that hurts religious sentiments. The DUJ also cautions against this incident being utilized to inflame passions.

However, the DUJ would also like to point out that this is not an isolated incident. Journalists have been at the receiving end in all types of conflicts around the world. Recently, they have been targeted and killed by the ISIS in Iraq and elsewhere. Scores of journalists covering the conflict in Syria have been killed.

The DUJ conveys its heartfelt condolences to the families of those killed. It expresses its solidarity with the protests worldwide being planned by journalists against these killings.

“I express my condolence to the family and friends of victims, God bless those who killed in this anti-terror attack, and I wish soon recovery for those get injured. I hope the year 2015 bring a unity and peace in all of the word and such kind incident be the first and last in the world and Paris. Freedom of expression and freedom of speech is the sole and life of Journalists without that they prefer to die.”

“FNJ expresses deep sadness and solidarity with the victims and their family and joins hand with press freedom organizations to condemn such brutal attack.”

“At every turn of event humankind has faced untold sufferings, and cruelty arising among its own ranks. We, journalists in Sri Lanka have lived the darkness of repression for many years, yet, this news created a massive wave of shock in our hearts. This is an attack on every messenger in the world. We salute all those colleagues for their bravery and we pledge to take their strength forward. As Free Media Movement of Sri Lainka we wish to give our heartfelt condolences to these colleagues’ families and friends. We have miles to go before we sleep.”

“The militant attack on free speech practitioners in French soil has hurt the sentiments of all those who have belief on people’s right to freely deliver and disseminate ideas and expressions. The disgusting attack has spread a shockwave among the freedom of expression practitioners and activists from across the world. It is the reflection of attack on free speech throughout the planet.”

In a statement issued here on Thursday, Indian Journalists Union (IJU) President S N Sinha, Secretary-General Devulapalli Amar said that the cartoons and cartoonists were usually irreverent of anybody standing on high pedestal and were meant to expose their follies and bring out their human frailties in to sharp focus and tell the people that they are also human beings. Those who were insensitive to the human nature feel offended by the cartoons, they said.

By attacking and killing four cartoonists, the terrorists threw a challenge to the fourth estate which must be met with “we do not care and we cannot be intimidated” attitude and carry out task of freedom of expression with renewed vigor, the statement said.

The IJU leaders called on the working journalists everywhere to come out in open and tell the extremist elements of all hues that their threats and terror acts would not deter them from their sacred mission.

The Indian Journalists Union (IJU) condoled the death of 12 persons including four cartoonists and pledged that the international working journalists professional and trade union movement would not allow their supreme sacrifice to go waste by standing up to the attackers and killers of freedom of expression.

“The Journalists Association of Bhutan would like to join the IFJ in condemning the ruthless attacks on Charlie Hebdo. We are deeply shocked and saddened by such inhuman acts of violence and terror. We pray for the souls of the brave journalists at Charlie Hebdo and for the speedy recovery of those injured. Je Suis CHARLIE.”

“We are shocked and strongly condemn it. This incident however, shows that there are several other hazards that media workers face in seeking fair and equal representation within the media in France.

We call upon the French Government to ensure the safety of media workers in Paris and book the culprits who are behind this heinous crime and extend our support to griefed family.”

Nepal Press Union is saddened by the news. There are no words to condemn the attack.

NPU strongly condemn the attack and demand that the attackers are brought to justice. NPU expresses condolences to the families of slain journalists; solidarity with French journalists.