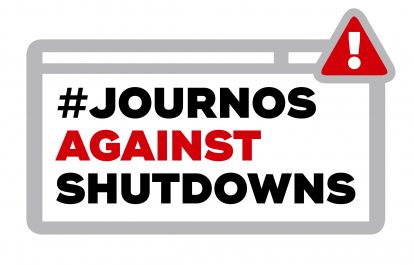 The International Federation of Journalists (IFJ) and the South Asia Media Solidarity Network (SAMSN) today launched a South Asia-wide campaign against internet shutdowns terming them ‘an act against the freedom of expression and press freedom’.

The #JournosAgainstShutdowns campaign is launching at a time of increasing shut downs of the internet in the region, especially in India, Pakistan and Bangladesh.

India is right now experiencing two significant shutdowns. Mobile Internet services in Saharanpur, Uttar Pradesh were suspended on April 24 amidst violent clashes between two communities; and in Kashmir for the fourth time in 2017 on May 27, immediately after expiration of a month-long restriction on 22 social media and instant messaging sites and apps.

“South Asian nations are shutting down the internet at various levels on grounds of security or for other reasons, often without clear legal mandate or using outdated laws. Internet shutdowns not only affect a country economically and deny citizens their fundamental rights but are also against freedom of expression and press freedom,” the IFJ Asia Pacific said. “The internet is a vital tool for media and journalists, and its access should remain uninterrupted.”

Internet shutdowns are a form of censorship that also prevents journalists from freely reporting, and citizens from sharing information.

The IFJ/SAMSN #JournosAgainstShutdowns Campaign aims to raise awareness among media workers on the impact of internet shutdowns as a freedom of expression and press freedom issue; encourage journalists and their unions and professional organizations to advocate against and monitor shutdowns; strengthen regional collaboration and join international efforts and coalitions in advocacy against internet shutdowns.

Internet shutdowns have been identified as a major issue by SAMSN in 2016 and the IFJ in its reports, New Fronts, Brave Voices: Press Freedom in South Asia 2016-2017 and Breaking the Walls: The fight for freedom of expression in the digital space in South Asia.

Join the IFJ / SAMSN #JournosAgainstShutdowns Campaign by using the hashtag.
Follow the campaign here and you can find campaign graphics to share on social media in most of South Asian languages here.