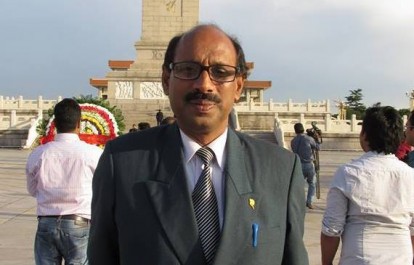 The International Federation of Journalists (IFJ) joins the Bangladesh Manobadhikar Sangbadik Forum (BMSF) in expressing serious concern over the arrest and detention of a journalist in Dhaka over a Facebook post. The IFJ calls on the government to take immediate action to repeal the ICT Act which continues to be used to suppress freedom of expression.

Probir Sikdar, the editor of online news portal Uttoradhikar 71 News, was arrested on August 16 from his office by policemen in plainclothes after Minister Khandaker Mosharraf Hossain filed a case against him under the ICT Act for a Facebook status he had posted on his personal page earlier this month.

In the Facebook status, Probit claimed to be under threat and that Minister Hossain, Moosa bin Shamser and fugitive war criminal Abul Kalam Azad would be responsible if he were killed. He posted the status on August 10, days after police refused to register a General Diary over a threat he and his family had received. Along with the status, he uploaded the draft of the letter to the police saying ‘he is registering the case in people’s court’.

A local court on August 17 sent Probir to jail after police produced him to the court seeking 10-day remand for investigation.

Probir was attacked April 2001 leaving him with limited mobility following his reports in Bangla daily, Janakantha, against alleged war criminals, including a controversial businessman and now condemned war criminal Azad.

The IFJ said: “We express serious concern following this incident. Jailing journalists and media workers works to further undermine press freedom in Bangladesh, which has come under an increasing number of attacks this year. The ICT Act of Bangladesh has a history of being misused against journalists by criminalizing their free expressions.”

The IFJ added: “The IFJ demands that Probir Sikdar should immediately be released and the case under the ICT Act to be immediately dropped as posting a Facebook status doesn’t fall under the cybercrime.”