Journalist stabbed to death in Bangladesh 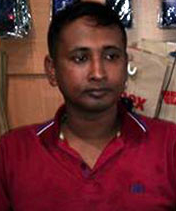 The International Federation of Journalists (IFJ) and the Bangladesh Manobadhikar Sangbadik Forum (BMSF) deplore the murder of a journalist on July 8, 2015. The IFJ demands immediate action to end the attacks and killings of journalists in Bangladesh that has seen freedom of expression deteriorate in 2015.

Abu Sayem, a 35-year-old correspondent of the Bangla-language Samakal daily, was critically injured in a stabbing attack at his home on Tuesday, July 7 and he died at a hospital in Dhaka on July 8. His father was also wounded in the attack.

According to reports, a man attacked Sayem and his father, Abul Khayer Mollah, when he broke into their residence. They were rushed to hospital, and Mollah was released shortly after receiving treatment. Sayem was referred to the National Institute of Diseases of the Chest and Hospital in Dhaka where he later died from his injuries. The assailant fled the scene; however he was later identified by Sayem’s father and arrested by police.

Following the arrest of the attacker, identified as Rajib Rahman, police immediately registered a case. Colleagues of Sayem and members of the journalist community in Dhaka took to the streets following his death to protest the murder and demand justice.

The IFJ and the BMSF express condolences to Sayem’s family and colleagues.

The IFJ said: “The IFJ condemn the murder of Abu Sayem and demand the government of Bangladesh investigate the case to deliver justice to the slain journalist.”

The IFJ added: “This is the fourth media related killing this year in Bangladesh with three bloggers already brutally murdered this year. The safety of the media community remains an issue in Bangladesh and the government needs to take immediate action and increase security to ensure there is an end to the continued attacks against the media.”

In February this year, US-Bangladeshi blogger Avijit Roy was brutally hacked to death in Dhaka as he was in Bangladesh to launch his new book. In March, Md Oyasiqur Rahman Babu was killed, which two of his attackers said was the result of his writings. In May, Ananta Bijoy Das was killed when four men chased him down on his way to work. Das regularly wrote pieces published on Avijit Roy’s Mukto-Mona (free mind) blog.