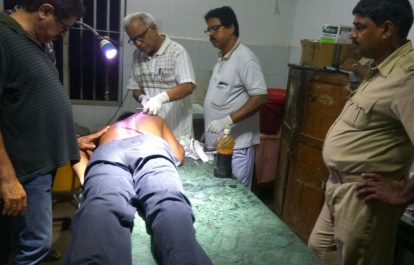 The International Federation of Journalists (IFJ) joins the National Union of Journalists (India) in strongly condemning the brutal attack on a journalist in Odisha, India on August 7 night. The IFJ demands urgent action from the authorities to arrest the perpetrators.

Ramesh Rath, a Balipatna based journalist working for Pragativadi, an Odia-language daily was attacked by two bike-borne miscreants with a sharp weapon in the late evening of August 7. Rath sustained a deep cut on his back and is currently undergoing treatment at the Capital Hospital in state capital Bhubaneswar.

The journalist told Odisha TV: “I was sitting in front of my house when the two bike-borne youth came. Seeing them coming towards me, I asked them if anything was wrong but the person sitting on the back seat suddenly attacked me with a sharp weapon. I could not identify them due to bad light.”

The attackers fled the scene immediately. The police is investigating the case and the reason behind the attack is yet to be ascertained.

NUJ(I) Secretary General Ratan Dixit in a statement, said: “We demand adequate compensation to the injured journalist; and appeal to the state authorities to ensure that such incidents would not occur in future.”

In addition to demanding immediate arrest of the culprits, we reiterated its demand for a Journalists Protection Act to ensure safety and end impunity for attacks on journalists.

The IFJ said: “The IFJ condemns the brutal attack on journalist Ramesh Rath in Odisha, India, and demands that the Indian government immediately arrest the attackers and punish them. The IFJ also urges a safe working environment for journalists in India amidst the growing trend of attacks and harassment of journalists.”

Photo: Ramesh Rath in hospital after the attack.