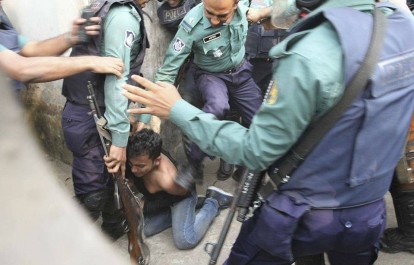 The International Federation of Journalists (IFJ) and the Bangladesh Manobadhikar Sangbadik Forum (BMSF) strongly condemn the beating of two television journalists inside a police station in Dhaka, Bangladesh on January 26. The IFJ demands punishment to the responsible policemen.

Cameraperson Abdul Alim and reporter Ishan Bin Didar of private TV station ATN News, were brutally beaten by a group of policemen inside the Shahbagh Police Station while they were covering the shutdown enforced by the demonstrators protesting the construction of a power plant. Alim needed three stitches on his right eyebrows as a result of the beating.

Alim narrated the incident to a newspaper: “I was on duty to cover the shutdown… Suddenly, a pro-hartal (strike) activist was taken inside the police station while he was being beating up. I was recording footage of the incident and entered the police station. At one stage, some policemen started shouting, saying ‘the journalist is recording footage of us, catch him’. Within a moment, around 15 to 20 policemen swooped down on me and started beating me up.”

The IFJ said: “The IFJ strongly condemns the attack on journalists by policemen in Bangladesh. Such incidents not only undermine press freedom but also degrade police’s reputation as the protectors of civil rights. The IFJ demands immediate action on the policemen involved in the attack on the journalists.”