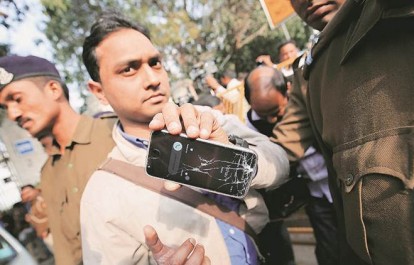 The International Federation of Journalists (IFJ) joins its affiliate the Indian Union of Journalists (IJU) in condemning the attack on journalists at the Patiala House Court premises in New Delhi, India on Monday, February 15. The IFJ calls on the Indian government to launch an inquiry into the declining safety conditions for the country’s media.

According to reports, during the court hearing of sedition charges against the Jawaharlal Nehru University (JNU) Student Union president Kanaihya Kumar, lawyers asked JNU teachers and students to vacate the front seats in the court room. When the teachers and students refused, they were attacked by the lawyers. Following the incident, the lawyers noticed media in the court room who witnessed the incident, and began threatening and attacking them.

Amit Pandey from IBN 7, Ritika Jain from DNA, Alok Singh and Kaunian Sheriff from the Indian Express, Amiya Kushwaha from IANS, Prachi Yadav from the Navbharat Times, Sana Shakil from the Times of India and Suhshil from Total TV were threatened and attacked. The lawyers also stole the journalist’s mobile phones deleting photos and data.

Following the incident, journalist Alok Singh wrote: “I remember screaming at them, ‘I am a journalist.’ But nobody seemed to care. After a few more seconds, they stopped but then another man dressed like a lawyer walked up and slapped me again. They kept shouting at me, “He recorded a video…get out of here…get out.” … As I began walking away, I noticed a few journalists being chased by a group of men in black. He was beaten but managed to escape. I ran towards the policemen… None of them moved or even attempted to intervene.”

Journalist Sneha Agrawal from the Mail Today recounted the day as the scariest day of her life: “ In horror, I saw fellow journalists being beaten up by a mob till the mob turned on me, demanded that I hand over my mobile phone so they can check if I was filming the violence. The police just silently watched. When I managed to wriggle out, I hid with a couple of reporters in the NIA court for 45 minutes.”

IJU President S N Sinha and Secretary General Devulapalli Amar in a statement said: “The assault on journalists is a brazen attack on the freedom of press and that the journalists were stopped from carrying out their duties.”

The IJU added: “This is absolutely unacceptable. The IJU has demanded that the government order an inquiry into the incident and take appropriate and immediate action against the lawyers, who feel they have the license to silence dissent and muzzle the media. The IJU also expects the Supreme Court to intervene and ensure that the media be allowed to cover court proceedings without any hindrance by any individuals or organizations.”

The IFJ said: “The increasing number of attacks against journalists is a worrying trend across India. The government of India needs to take immediate action to stem the tide of violence. The IFJ demands full inquiry into the incident and the punishment to the culprits to restore the respect for law and democracy.”