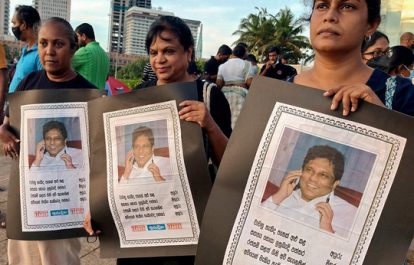 Amid a state of political uncertainty and ongoing protests across Sri Lanka, the role of journalists has become even more crucial, writes Ruki Fernando.

Since late March, spontaneous street protests have been held across Sri Lanka, calling for the resignation of President Gotabaya Rajapaksa, his brother and Prime Minister Mahinda Rajapaksa, and several others from the Rajapaksa family who held Ministerial positions before resigning in the wake of protests. Triggered by massive price hikes and shortages of gas, fuel, electricity, food, medicine, and fertilizer, among others, social media has also been an important battle ground for protestors.

On the night of March 31 and in the early hours of April 1, many protesters and bystanders were beaten and arrested as they marched to the President’s residence in Colombo. At least nine journalists were injured, with several being hospitalised and at least one undergoing surgery. Some journalists were beaten despite identifying themselves. One was denied medical assistance at the police station. Cameras were also damaged. When a well-known journalist returned to the site the next day for additional reporting, he was threatened by individuals who claimed to be from the President’s Media division and was compelled to leave the area.

The arrests and attacks on both protesters and journalists led to widespread condemnation and hundreds of lawyers came to the police and courts to defend the detained free of charge. Journalists from the Mulaitheevu Press Club in the North were among those who condemned and protests the attacks against journalists in Colombo.

In the aftermath, journalists revealed that on April 1 the Police chief had ordered an investigation into a major private television channel, News First, in an effort to blame the channel’s live broadcast of the previous night’s protests for the unrest that occurred. In another effort to crackdown on free expression, the District Secretary of Kandy district, the district’s most senior government official, warned a junior government official not to criticise the government or government policies through social media and threatened to take action against her. An employee attached to a leading state media institution was suspended from service for participating in a protest after his work hours and journalists from a major private media institution reported that staff leave was withdrawn to prevent them from joining protests. Last month, as protests were spreading, a female TV presenter was suspended by a state media institution for a private social media post critical of the President.

Repressive laws and the arrest of a social media activist

As a major protest was being planned in Colombo on April 3, a state of emergency was declared on April 1, empowering the president to issue emergency regulations that can be used to curtail protests and freedom of expression. This was followed by the declaration of a countrywide curfew from 6 pm on April 2 until 6 am on April 4, effectively stopping the massive protest planned for April 3. But many citizens defied the curfew and held protests in their neighbourhoods, with numbers increasing from approximately 10,000 to 15,000 within only a few hours. During the curfew, several social media applications were blocked, including Facebook and WhatsApp, which were widely used in protesting against the government and the organisation of street protests. The blocks were lifted the same afternoon. The curfew was not extended, and the state of emergency was revoked on April 5.

In the early hours of April 1, a young social media activist who had supported the protests was abducted from his house. Police initially denied knowledge of his whereabouts. However, after a series of interventions by the Young Journalists Association, lawyers and the Human Rights Commission, police acknowledged his arrest and detention and he was produced before a Magistrate just under the stipulated 24 hours and released on bail. Another activist was summoned for questioning by the police on April 4 in relation to a slogan he had displayed in his car.

Intensification of protests and evolving demands

Despite these repressive actions, protests continued across the country. A continuous day and night protest, which began on April 9 at the Galle Face Green just outside the Presidential Secretariat in the heart of Colombo, was the largest and most diverse peoples’ protest I had joined in Sri Lanka and brought back memories of People Power 2 (EDSA 2) in the Philippines that I joined about 20 years ago. Braving scorching sun and heavy rains, protesters have occupied the area and named it ‘Gota Go Village’, with tents, mobile toilets, medical facilities, a phone charging facility, and cultural activities.

Some journalists have been at the site day and night, providing constant updates, diverse perspectives, and remonstrating against the jamming of the site’s internet connection.

Amongst those who joined and covered the protests was Kumanan (@kumanan93), a young Tamil journalist from the North. According to him, “media has responsibility to amplify struggles for social justice, and journalists are activists who should proactively cover these movements and record developments as news or statements’’. He also stated that “as a journalist from the North [a war-affected and highly militarised region] media has been able to strengthen local movements and take people’s voices far and wide”.

An International Media Centre has been established at ‘Gota Go Village’, holding press conferences in support of the protest by medical specialists, engineers, lawyers and trade unionists. Academics, human rights defenders, and representatives from the Human Rights Commission of Sri Lanka have been using the centre to interact with the media. However, journalists have reported that many intelligence personnel have been loitering around. A journalist’s laptop and the media centre’s banner went missing on the nights of April 16 and 17 respectively, despite police stating to courts that they are engaged in close observation of the protest site and the activities of protesters.

Initial demands of “Go Home” are now evolving to “Go to Jail” and “Return Stolen Money” with some demanding legal, institutional, and other structural and systemic changes. Slogans ​​​have also emerged regarding alleged war crimes and the need for global action such as an international tribunal, asset freezes and travel bans.

On April 11, the third continuous day of protests at the Galle Face, I saw a protester holding a sign demanding justice for murdered journalist and editor Lasantha Wickramatunge. Another protestor held a sign with the phrase,“Satakayo Gathakayo,” which implies that those who wear shawls, like most in the Rajapaksa family, are killers. This is the first time I have seen this slogan since the funeral of Lasantha more than 13 years ago. On that night, huge placards of murdered, tortured, and disappeared journalists were placed on the fence of the Presidential Secretariat. Sandya Ekneligoda, a prominent rights advocate and the wife of disappeared journalist Prageeth Ekneligoda, was also present at the Galle Face protest site. On April 18, a group of journalists held a protest at the site, with a larger march planned for April 20.

There is fear and uncertainty about what may happen next, including the potential of a military crackdown, discrediting of the protests and protester fatigue. There are also concerns about a lack of political alternatives and challenges addressing long-term issues, such as the causes and consequences of ethnic conflict, rights of numerical minorities, rights of other marginalised and vulnerable groups, militarisation, privatisation, and impunity for crimes against journalists.

But the protests have been inspiring, heartening, and hopeful. To see so many people, especially youth, including journalists and social media activists, standing up courageously and creatively for rights, justice, and democracy is a moment of political awakening for many Sri Lankans.

In significant political moments such as these, freedom of expression and the role of journalists become even more important, but also more difficult and dangerous. Journalists have already paid a price for the repression they have faced, but there is also growing public appreciation of the roles played by independent journalists. Several protesters told me that the presence of journalists serves as a measure of security and support. Many journalists are already making use of the space to push for democracy, freedom of expression and accountability for past crimes. The Young Journalists Association re-launched a social media campaign encouraging protests and initiated a hotline for any detained persons or those facing imminent detention to call and seek assistance.

The role of journalists will be crucial as protests continue amidst Sri Lanka’s political uncertainty and they must be supported as they rise to meet these new challenges.

Ruki Fernando is a Sri Lankan human rights activist and writer. He is a member of the Executive Committee of the Free Media Movement (FMM). His writings are available at www.rukiiiii.wordpress.com.