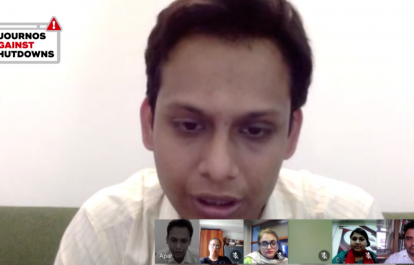 As part of the Campaign Against Internet Shutdowns in South Asia, journalists from five countries in South Asia speak about how internet shutdowns affect freedom of expression and discuss what can be done to counter the phenomenon.

Ujjwal Acharya (UA): I had a brief experience with internet shutdown as a journalist back in 2005. We had weeks of internet shutdown by the autocratic king at that time when he imposed tight censorship. At that time, I used to work with The Kathmandu Post. Once the internet was shutdown, it was difficult to function normally because it was like everything wasn’t falling on the place. My experience with the internet shutdown is it really, really, really hampers journalism, at least for a few days in the beginning. It hampers journalism in two ways: first, the information that journalists get, it becomes really difficult to verify that information. And, when it is printed, there are problems. Another is that the newspapers become very formal one instead of a critical voice.

Lubna Jerar Naqvi (LJN): Pakistan’s got a few shutdowns. In 2010, we had a YouTube shutdown by the government for blasphemous contents. So intead of working around it, they blocked it. Day after tomorrow, there will be another shutdown because there is a procession. This is a normal thing that happens here in Pakistan. During certain sessions, or dates, or major incidents, we usually experience shutdown or internet becomes slower because of the channels being used by VIPs in the area. So Pakistan’s journalists have started to use SMS that the way they have found to work out it, the internet shutdown. Karachi itself is having a lot of problems. It’s a big problem for many of us here so we use wireless phones here or do it manually by sending someone to and fro the site for the news. But for journalists living in the rural areas – the Tribal Areas – it’s difficult.

Nadia Sharmeen (NS): In Bangladesh, we are very much used to Facebook, we are communicating through Facebook a lot actually. And internet is much important for us as journalists. When internet shutdown takes place, like last year, we face difficulties in communicating with each other. It was very difficult even to make the news because it’s also a medium of direct communication with our senior people. It also affects online media. By shutting down something, you can’t pretend something doesn’t exist. We have to find out other ways to deal with problems instead of shutting internet down.

Apar Gupta (AG): As a lawyer practicing in this area, I have been looking at regulation and how policies are developing. It is concerning that online censorship is a constant issue which comes up every few years. Earlier, we had issues with selective blocking of websites or we had issues such as state authorities themselves sending notices to social media companies. With internet shutdowns, I think this is another level altogether where access itself is restricted and this affects open communities as well as journalists, more often than not when they want to report on issues especially concerning law and order. India being a constitutional democracy, some of the restrictions, which may be available, may be within the law itself. Of course there are other technological ways to defeat internet shutdowns and prevent censorship and this is also being a source of sustaining freedom for expression.

I think there is no consistent strategy with legal authorities across South Asia region, which empowers the government to shutdown the internet. But with our shared colonial past, we even share the laws, which are the premised to be the basis of the shutdowns itself. Such as powers which are contained for preventing unlawful assembly which is the law that has been used in India more often than not rather than the telecommunication law which does allow the state to prevent access but at the same point of time there are no set rules which govern the procedure for it. So the strategies need to be examined.

Journalists are under increased threat, not only physical threats but even a threat to their very work and function of how do they get messages out. I think that would be larger advocacy efforts. Larger communities of journalists across the South Asia region will need to ascertain that internet shutdown is not only a larger civil rights issue but also a press issue. It concerns all of you in terms of what only you do professionally but also why you do it as well. It is providing a voice to the people who lived in this kind of areas where the internet is often shutdown and where there may not be high degree of stability. Even what we have noticed in India is that internet shutdowns are taking places in regions which have seen some elements of conflict or which are not economically prosperous as a metropolitan city. These are just some preliminary thoughts. I think we need to engage with all to emphasize on that civil rights are our fundamental rights.

Nalaka Gunawardena(NG): In Sri Lanka, we haven’t had complete internet shutdown except once which was unintentional in our early days of internet connectivity. There was a cable disruption and the whole country was without internet connection for five days. This was 15 years ago. We have had partial shutdowns during the last years of our civil war. We had in conflict areas, the mobile telephone services were shutdown for weeks at a time. Randomly, sometime the signal was turned on and off suddenly. Nobody knew what the schedule was, or whether there was one. Given than we are predominantly a mobile user country, and very limited landline. Just to give you a statistic, we have 125 active mobile connections to a hundred people. Ten years ago, it should have been different but it was still predominantly mobile. And, 80 percent of internet use is through mobile devices. So when the mobile signals were turned off in eastern and northern provinces that deprived people of all telecommunication services including access to internet. This was from 2006 to 2009 periodically and arbitrarily.

Since then we didn’t have area-specific shutdowns but we had what you also had in other South Asian countries is blocking the websites of political contents. The former government, starting in 2007, blocked websites that were carrying political or dissenting viewpoints and this ended only when the government changed in January, 2015. One of the election issue [of the current president] was ending the arbitrary blocking of the political websites and so far, more than two years into the current government, we have no websites being blocked except a few that have been sanctioned by court due to pornographic contents. All the political websites including those that are very critical of the government remain accessible. I hope we don’t join the dubious club of countries that are experiencing internet shutdowns and at the same time, we would be in solidarity with South Asian countries and countries elsewhere in this advocacy campaign.

Laxmi Murthy (LM): One of the issues that has also come up is that with internet shutdowns –especially in large countries like India– it’s not one kill switch shutting everything down, but its more localized. Therefore, I think struggling against it or challenging it is more difficult. The other point is also that it’s almost a given that the shutdown happens at the places where it is needed the most or during the time that it is need the most. So in the conflict areas or during the civil strife, at a time when you expect any kind of escalation in political or social strife, it’s when you need the internet to be able to communicate the news to most as there are post-truth rumours and speculations and misinformation; and those are precisely the time when you don’t have access the internet.

NG: I think we need to present both the human rights and business case against internet shutdowns. Increasingly, countries, societies, and economies are connected digitally within the country and to the global economy. Shutdowns have clear, documented demonstrable economic costs. That is the language that many government and policymakers hear than simple human rights and freedom of expression of case.

UA: Thank you very much for participating in today’s Google Hangout. This is the beginning of our message to all governments in South Asia that journalists are against all these internet shutdowns.