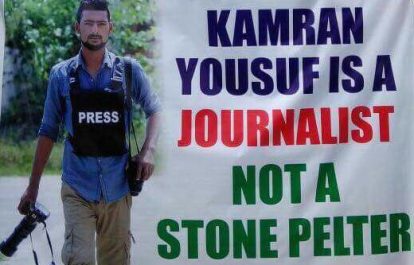 The International Federation of Journalists (IFJ) joins its affiliate the Indian Journalist Union (IJU) in condemning the extended detention of photojournalist Kamran Yousuf, by India’s National Investigation Authority (NIA).The IFJ demands immediate release of the Kamran Yousuf and dropping of all charges against him.

Yousuf, 23, based in Pulwama, contributed to various national and international publications including the largest circulated English daily in the state, Greater Kashmir. He was arrested by local police on September 4, 2017, and taken to New Delhi by the NIA on suspicion of conspiracy and instigating stone pelting at security personnel.

The arrest of Kamran Yousuf has been widely condemned including by the Kashmir Editors Guild (KEG), the Kashmir Young Journalists Association (KYJA) and the IFJ. On September 14, 2017, the Press Council of India served notice to the NIA and police authorities, expressing concern over the arrest of Yousuf.

The NIA, a central counter-terror agency established by the Government of India in 2008, has sweeping powers, which appear to be being misused against journalists. The NIA in its charge-sheet filed on January 18, listed the “moral duty of a journalist” and went on to observe, “Had he [Yousuf] been a real journalist/stringer by profession, he may have performed one of the moral duty of a journalist which is to cover the activities and happening (good or bad) in his jurisdiction. He had never covered any developmental activity of any Government Department/Agency, any inauguration of Hospital, School Building, Road, Bridge, statement of political party in power or any other social/developmental activity by state government or Govt of India.” The NIA further listed “social work” done by the security and para-military forces in Kashmir, such as blood-donation camps and medical check-ups, and questioned Yousuf’s credentials as a journalist because he did not take videos or photographs of these public relations events.

The Indian Journalists Union (IJU) President S N Sinha and Secretary-General Amar Devulapalli termed the argument of the National Investigative Agency (NIA) that Kamran Yousuf could not be called a journalist as he never covered ‘development activities’ of any government or its agencies as dangerous as it makes the independent journalism to stand on its head.

“We strongly condemn the NIA for trying to usurp the roles of editor and working journalist by specifying what news should be covered and what news beat an independent journalist cover. This is a direct attack on independence of choice of journalist which is not acceptable. We call upon the working journalists all over the country to protest against the over-bearing attitude of the NIA. We demand the Press Council of India (PCI) to take suo motu cognizance of the unfair arguments of the investigation agency and take steps to protect the independence of journalists,” they said.

The IFJ said: “The arrest of photojournalist Kamran Yousuf and baseless charges framed against him by the National Investigation Agency are clearly attempts to muzzle the press and intimidate and silence the media in Kashmir. It is a journalist’s duty to speak truth to power and expose wrong-doings; and no state agency, including the NIA, has the right or the role to preach journalism. The IFJ stands in solidarity with photojournalist Kamran Yousuf and demands that the Indian authorities release him immediately and drop all baseless charges against him.”