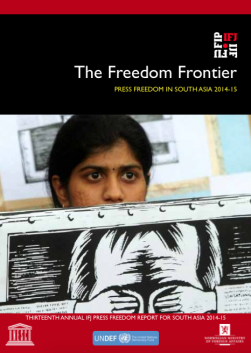 Formerly the North West Frontier Province, Khyber Pakhtunkhwa (KPK) is the third largest of Pakistan’s four provinces in terms of its population and economy and has its own provincial government and independent provincial assembly. The Federally Administered Tribal Areas (FATA) comprise seven administrative agencies and six frontier regions and are directly governed by the Federal Government of Pakistan. Special laws such as the draconian Frontier Crimes Regulations (FCR) are operative in FATA.

Both KPK and FATA with a majority Pakhtun population were relatively peaceful – barring some administrative and political problems – since the birth of Pakistan in 1947. However, trouble in this rugged and beautiful borderland began in the late 1970s with the war against the Soviet Union in Afghanistan, along with infighting among various Afghan groups which spilled over into the region. The security situation worsened after the US attack on Afghanistan in 2001.

KPK and FATA gradually transformed into a veritable war zone when the Pakistan Army initiated military operations against local and foreign militants including Al Qaeda in 2002. A couple of years on, local militants began an attempt to seize power in Pakistan. American drone attacks to flush out militants have resulted in severe collateral damage in the shape of civilian deaths and made living and working conditions in these areas that much more dangerous. Since 2003, more than 30,000 lives have been lost in KPK and FATA. Over the last 13 years, around ten major military operations were launched, the most recent being Operation Zarb-e-Azb launched in 2014.

No journalists were killed in KPK and the Tribal Areas in the year under review 2015, but the precarious security situation has also affected journalists who work under extremely stressful conditions, subjected to pressure from security agencies, armed militant groups, district administration and tribal leaders.

With the rapid launching of private TV channels, local and national newspapers, FM radios and periodicals, the number of journalists in KPK and the Tribal Areas, is on the rise with more young men and women joining the profession. Journalists here face multiple challenges including insecurity of life, economic constraints, job insecurity, non-payment of salaries, impunity and unfavourable working conditions.

Journalists – both men and women – from electronic and print media in different areas of the province were interviewed for this report in order to gauge the ground reality. Interviewees revealed that although the number of threats from the Taliban had declined due to the ongoing army operation, incidents of intimidation and threats from various quarters including security forces, armed militants and politicians continue to be of serious concern. The prevailing atmosphere of intimidation and threats from all sides made journalism a particularly risky profession, as many journalists testified. Fazil a correspondent with a news channel from Hangu, shared that he had to leave his home after he got threats from terrorists for reporting news which was against them. Ahmed, correspondent with a newspaper and TV channel from Abbottabad, said that the local police had cracked down on journalists for reporting on the increasing crime rate in the area. Khan, a correspondent from Bannu said that there area had once been a stronghold of militants but the law enforcing agencies were successful in restoring peace, but now, news related to the security situation was regularly scanned and controlled by security agencies.

Hussain, a correspondent from Khurram Agency said that he was himself kidnapped by armed militants and was detained four years ago when he reported a story against militants. He related that in similar style, in December 2009, Taliban militants in Miranshah detained a freelance journalist working for the Associated Press (AP) for shooting in the volatile tribal region in violation of a ban imposed by them. Taliban spokesman Ahmadullah Ahmadi said by phone from somewhere in North Waziristan that the reporter had been taken into ‘custody’ for violating the ban. He was later released. In a direct attempt to control the media, in April 2010, a journalist, Muhammad Imran Khan, and his sister were injured when unidentified militants made a failed attempt to abduct them from their home in Khar, Bajour Agency in FATA. The Tehrik-i-Taliban Pakistan (TTP) spokesman Azam Tariq told journalists in North Waziristan that the “pro-America” media was spreading wrong information about the TTP.

Wazir, a journalist from Waziristan said that journalists were not only threatened by militants but faced risks because of drone attacks. Khan, a correspondent from Mohmand Agency said that incidents of missing persons were common but reporting such incidents is tantamount to putting your own life at risk.

It is often difficult to uncover the perpetrators On July 2, 2014, the home of Jamshed Baghwan, the bureau chief of Express News in Peshawar was bombed. This was not the first time he had been subjected to an attack. In March 2013, a bomb was found in his house but defused before it was detonated. A few weeks later his home was damaged by a grenade.

In some cases security agencies or militant organisations pressurizing journalists to get ‘clearance’ from them before releasing their news reports.

There are around 350 newspapers, magazines and periodicals being published  from Peshawar. Most reporters earn a pittance of approximately PKR 10,000 (USD 100) while camerapersons earn about PKR 5000 (USD 50).  This meagre amount is a violation of the amount set by the KPK government, PKR 15000 (USD 150). They are also not following the Government of Pakistan Wage Board Award pay fixation, as the implementing authority, the Labour Department, is weak in enforcing implementation. Additionally, media owners openly defy the notification of the provincial government of KPK and exploit their employees despite the fact that the media industry receives USD 13,00,000 annually in government advertising revenue alone. This is quite apart from advertising budgets of private business.

However there are a few newspapers published from Peshawar where the minimum salary for reporters is PKR 15,000 (USD150), camerapersons PKR 10,000 (USD100) and the maximum salary is PKR 40,000 (USD 400). However the salary of media persons working for national dailies including English and Urdu are comparatively higher, with minimum salary packages being PKR 25,000 (USD 250) and the maximum going up to PKR 100,000 (USD 1000). The salary package in the electronic media is also unsatisfactory, with junior reporters and camerapersons drawing a salary of around PKR 15000 (USD 150) while senior reporters’ salaries could cross PKR 100,000 (USD 1000). 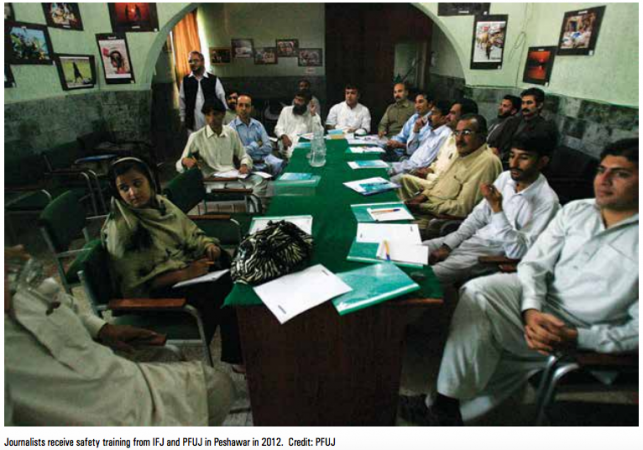 The low and irregular salaries as compared with bigger cities like Lahore, Karachi and Islamabad despite tough working environments are a major area of concern. Even though some media houses do not pay monthly salaries, journalists are forced to continue or face losing huge outstanding salary arrears or losing their job altogether. There is also no compensation for the journalists who die while on duty; their families are left without any source of support.

Job insecurity, lack of insurance cover and proper safety training or provision of any protective equipment is common. Shahzad Alam, a correspondent from Swat, shared that he was working in a conflict zone without any safety equipment or proper training. Most of the fresh entrants into journalism lack professional training. They are hired as interns and are placed directly in the field without being equipped for such responsibilities in a hazardous environment. The journalists from FATA not only face life threats but now are also amongst the numbers of internally displaced persons (IDPs) after the ongoing ‘war on terror’. Although journalists are more aware now due to training workshops held by IFJ and PFUJ, they still need more training and education regarding safety, especially while they are performing their duties in the conflict areas. The majority of journalists are either unaware or not following PFUJ Code of Conduct while covering events. According to Nisar Mohmood Khan, President of Khyber Union of Journalists, since 2003, about 27 journalists in KPK and adjacent tribal areas have lost their lives in the line of duty while some of them could have been saved if they had adequate training to work in conflict areas. Lack of unity in a politically polarised atmosphere is another area of concern.

Lack of security for working journalists has been a major challenge for men while the situation is more threatening for women journalists. Women journalists are somewhat coping in urban areas like Peshawar and Abbottabad but are unable to work in tribal or other remote areas due to conservative attitudes and unsafe working conditions.  MS, a Peshawar based female journalist explained that she could not cover public as well as religious processions only because she was a female while exploitation from male colleagues was also a major concern.

Impunity is another area of concern. Since 2003, 26 media workers have been killed in KPK and FATA. But in many cases, despite demands from the unions, perpetrators have not even been identified, leave aside apprehended and punished. Some journalists have not only been verbally threatened but have also received bullets by post sent by unknown people. The perpetrators of such crimes are encouraged when they are not held accountability and brought before a court of law. The reports of threats from terrorists, local administration, state and non-state actors has been in great numbers while majority of the cases are not reported due to fear.

Pakistan remains one of the deadliest countries in the world for journalists, and impunity for the attackers remains almost absolute. The only two journalists whose murderers have been charged are the Wall Street Journal’s Daniel Pearl and more recently GEO news reporter Wali Khan Babar.

According to senior journalist Shamim Shahid based in Peshawar, in KPK and FATA despite vociferous demands and protest of the union bodies (PFUJ, Khuj and TUJ) not a single investigation report from any authority has been shared in the public domain. The hidden hand behind journalists’ killings therefore remains hidden.

In Pakistan, which was declared by the IFJ as most dangerous country for media persons, there is a grave need for journalists’ bodies to come together. Despite personality and leadership clashes, it is encouraging that all factions spill on to the streets in protest when issues of journalist safety and security are at stake.  Unions have continued to put pressure on the government to bring perpetrators to justice.

Between a Rock and a Hard Place

Ziaul Haq based in Peshawar has been attached with electronic media since 2003 and has been regularly covering news about the Taliban and the military action against the Taliban. He has interviewed senior Taliban leaders like Baitullah Mehsud, Hakeemullah Mehsud and many others, triggering threats.

Though threats have become routine for journalists covering Tehrik-i-Taliban related news, after the attack on the Army Public School at Peshawar on December 16, 2014, in which 132 innocent children were killed, media coverage of Tehrik-i-Taliban was strictly banned in both the electronic and print media. As a result, on January 10, 2015, the Taliban spokesman including Ihsanullah Ihsan were frustrated and phoned Ziaul Haq threatening that if his news was not run on the ARYNEWS channel, the Taliban would take action against him  and other media persons.  Following this, another group named Jundullah also sent him a text message in Urdu on his cell phone. Ziaul Haq then posted the conversation with the Taliban on Facebook (Haq Zia) on the same day to show that the abrupt government ban on coverage of Taliban news could have dangerous consequences. The PFUJ and the IFJ issued solidarity statements condemning the intimidation of journalists.

“I appeal to the Pakistan media to not take sides, otherwise the organisation will be compelled to take action against the media. Enough is enough. We had also condemned the attack on the Army Public School but the media is defaming the Taliban. We are going to hold meetings on media affairs. Al Qaeda will participate in the meeting.”