Kunduz: Aftermath of the Taliban Takeover 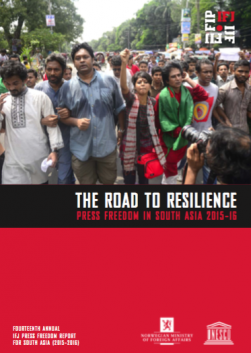 The capture of Kunduz province by the Taliban for 15 days in October 2015 caused significant damage to the local media. This was the first time in the 14-year period of the newly-elected government that the Taliban gained control of an important provincial capital.

Kunduz, located in the north and the fifth-largest city in Afghanistan, is of strategic significance and hence a vulnerable target. Almost all journalists were forced to leave their television and radio stations and media houses and move to nearby NATO and Afghan forces headquarter or neighbouring provinces, some even went to Kabul.

The media in Kunduz which operates with limited resources was in the large part very critical of the Taliban because most owners, broadcasters and managements were close to the former Northern Alliance. Most of Kunduz-based media houses were launched by politicians or by former German Provincial Construction Teams (PRTs) during their work and stay in the north-eastern provinces. The few radio stations in operation were mostly managed by local women journalists who had long been opposed to Taliban presence around the provincial capital and surrounding districts.

When trouble began brewing in Kunduz in October 2015, most of the electronic media in Kunduz left their offices and took their equipment with them even before Taliban entered the city.

The Afghanistan Independent Journalists Association (AIJA) called on the Afghan government and international forces to protect journalists and ensure their safe evacuation from the conflict zone. All journalists, producers, support and technical staff left Kunduz for neighbouring safe locations, nearby provinces or to Kabul. Only those that did not have the opportunity to safely remove their equipment, or those who could not arrange adequate security, were looted by the Taliban, as well as other armed gangs. It is unclear who exactly was responsible for the damage and loss.

An officer of the government media in Kunduz claimed that the Taliban had not set fire to any media office and that nothing had been stolen. This seems to have been borne out by eyewitness accounts. A person who lived next to a media outlet told the AIJA monitoring team, “I saw an armed Taliban member looking at the antenna of a radio/television and he said: ‘I think it’s the device which is showing our location to the enemy’.  He wanted to shoot the television antenna, when suddenly a civilian told the armed Talib, that it was the antenna of a radio television which was not broadcasting. Upon hearing this, the Talib didn’t shoot the antenna and said, ‘We have not been given permission to go and destroy the media houses and radio and televisions.’”

For three to four weeks, the local radio, TV stations and print media did not broadcast or publish any editions and journalists were not able to enter the city. AIJA took the lead in communicating the problems of the media community to all the relevant government departments involved in the Kunduz collapse and operations for re-control. We also contacted the Ministry of Information and the President’s Office to facilitate the visit out our delegation to the provincial center for investigation.

Soon after the re-control of Kunduz by Afghan officials and obtaining permission from government departments, AIJA sent a delegation to Kunduz for a first hand assessment and to conduct a monitoring exercise. The investigation and monitoring visit from October 24- 27, 2015 was supported by the IFJ and led by AIJA Vice President Hujatullah Mujadidi. The team of media monitors and journalists from Kabul and Kunduz visited fifteen media houses and met journalists, owners, editors, producers and some senior civil society members and eye-witnesses.

The only media house that could not be visited was Radio Jaihoon located away from provincial centre in an area still under the control of the Taliban. 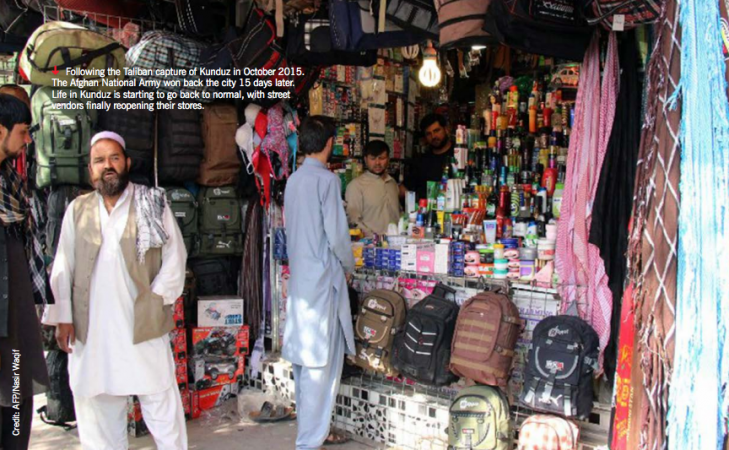 A few days after the Taliban control ended, only a limited number of staff and employees had returned to work. An obvious reason for the lack of return was the adverse psychological impact of the Taliban takeover, and the resultant feelings of fear and terror. The delay in resuming operations was also due to the need to reinstall equipment and set the studios and offices in order before calling reporters and other staff back to work.

When the AIJA delegation asked owners, managers, editors or producers why there were only a few reporters and employees back at work, owners said that they were not in position to pay them on time. A real fear is the attrition of employees who might move to other provinces or the capital Kabul in order to find more secure employment.

All media houses lost their source of income. They were getting small amounts of money from local branches of telephone companies, advertisements from different companies, banks, hospitals, schools, universities and others, which collapsed or relocated or stopped operations due to the instability. Some companies and banks stopped sponsorship of programs or giving advertisements to the media citing security risks.

Although some media houses re-started broadcasts with limited equipment, print media listed in this report have not been able to restart publication, and copies of print newspapers have not been published since October 2015.

Weeks after the collapse of Kunduz, the Taliban were controlling surrounding areas of the city and the majority of districts. Their palpable presence instils fear in the mind of ordinary citizens and the media. In April 2016, the Taliban started new movements to regain control of parts of city and the middle of April saw fierce battles around Kunduz city. There is a very real concern that the provincial capital will collapse at the hands of the Taliban once again

There has been little support forthcoming for the media houses in Kunduz. The Network of Women in Media, India (NWMI) reached out the women journalists and women owners of stations for support through AIJA and offered technical support to restart broadcasts. The government have collected reports about damages and losses and working on procedure to find ways for support. Some women-run radio stations which were formerly funded by Internews-US are likely to get support from the Internews-Afghanistan office. 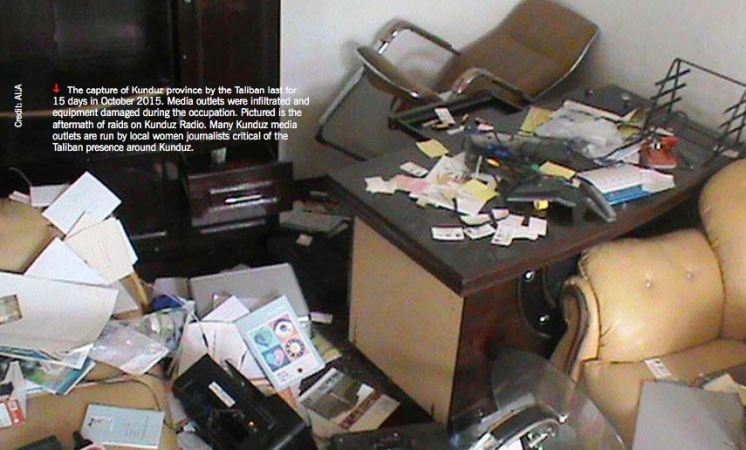 Short descriptions of the media houses monitored by the AIJA team: 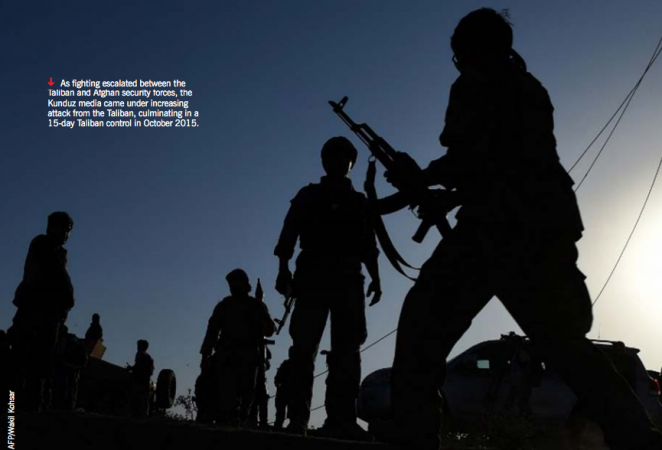 Following its spot visit, meeting with key stakeholders and observing the situation after the short-term takeover of Kunduz by the Taliban, the monitoring team listed the following key points:

(This is a part of the capsule report for the South Asia Press Freedom Report 2016 which is available to download in resource section.)