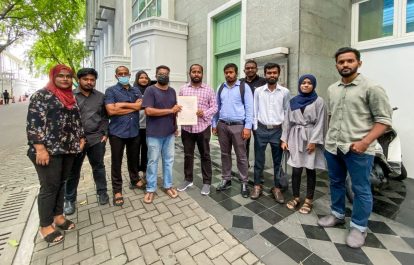 Despite progress and promises made by the current Maldivian government to address press freedom, there are still obstacles for journalists in the country. During an evaluation mission in the Maldives, the International Federation of Journalists (IFJ) met with journalists, media leaders and union stakeholders and notes a critical need for the establishment of an industrial legislative framework for media and other workers in the country.

During the one-week mission, the IFJ met with working journalists, editors, Maldives police and the Maldives Media Council as well as other key industry stakeholders and legal experts. Recent changes to the highly problematic Evidence Act remained an overarching concern in discussions, but the IFJ notes other issues were brought to light that continue to impede the development of a full and vibrant independent media in the country.

“The IFJ was gravely concerned to learn of the widespread industry practice of ‘docking’ journalists’ salaries by media companies when journalists were deemed to be underperforming or not filing a set number of stories per day. This arbitrary practice is a violation of journalists’ labour rights and is not conducive to the production of quality journalism,” the IFJ said.

“Coupled with this is a widespread lack of employment contracts and obstacles to accreditation – especially for freelance journalists. There is a vital need for worker rights to be protected which can only happen by strengthening the labour rights framework.”

Additionally, the IFJ calls on the Maldivian government for an urgent investigation into ‘shell media companies’ established as political influence fronts and for transparent reporting of that investigation. The issue is particularly pertinent given that all registered media companies are eligible to vote for members of the Maldives Media Council (MMC). With the new MMC election dates announced this week, the IFJ and its affiliate, the Maldives Journalists Association (MJA), maintain that media outlets not in the regular service of journalism production should be removed from voting contention in the upcoming elections to ensure legitimate media worker interests are represented.

Key issues identified by the IFJ were:

The IFJ noted concerns of journalists during trainings with its affiliate, the MJA. Discussions centred on issues including ongoing impunity for threats, attacks and forced disappearances of media workers, political influences on regulatory bodies, impediments to sustained careers in journalism for women, labour and employment rights issues and the ongoing lack of an industrial framework for Maldivian workers across the board.

The IFJ met with leaders from the Maldivian Trade Union Congress and has welcomed moves by the media industry to join lobbying efforts to the government on worker rights and protections. Following this meeting, the MJA Executive Committee unanimously passed a motion to launch a membership bid on August 24 to join the nation’s Trade Union Congress.

The IFJ has recommended the need for a media working group to improve communications between the police and the media. It also highlighted the need for greater female representation in unions and decision-making roles.

The establishment of a media rights mechanism for the country would also go a long way to raise awareness of journalist rights and media violations and also serve to educate the industry on professional standards for journalism.

The MJA said:“All parties – journalists, media outlets and the government – have a role to play in tackling the issues raised by the IFJ evaluation mission. This is crucial in order to ensure a safe working environment for Maldivian journalists. MJA remains committed and will offer its full support towards strengthening press freedom in Maldives.”

The IFJ said:“The Maldives remains a highly politicised media space. Greater efforts are needed to protect and defend media rights and media independence to ensure it is free of political influence, so journalists have the capacity to do their work safely and with job security.”

A Dhivehi translation of this statement is available here.