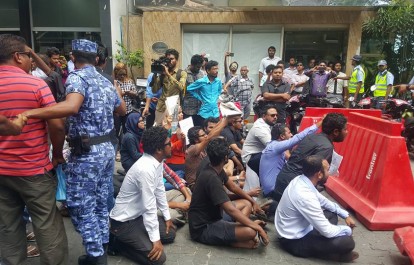 The International Federation of Journalists (IFJ) joins its affiliate the Maldives Journalists Association (MJA) in condemning the arrests of a number of journalists during a peaceful demonstration outside the President’s Office in the capital Male on Sunday, April 3. The IFJ calls on the Maldivian government to immediately end its crackdown on the media and guarantee press freedom across the country.

On Sunday, local journalists from various media organisations staged a demonstration in Male against the recent crackdown on media freedom including the proposed criminal defamation law, the court-ordered closure of Haveeru newspaper, and the protracted investigation into the disappearance of journalist Ahmed Rilwan in 2014. According to various news reports, 19 journalists were arrested, as police used pepper spray and excessive force to end the demonstration. A number of journalists also had to be taken to hospital due to injuries sustained.

The journalists arrested worked for local media outlets, including Haveeru, theMaldives Independent, Sangu TV, Raajje TV and Villa TV. They were arrested on charges of obstructing police duty, disobeying police orders and committing illegal actions. The journalists were released late on Sunday evening, after 10 hours of detention but have been ordered to appear at the police station on Monday, April 4 to give their statements.

The protests came after the decision was handed down by the Civil Court in Male on Thursday, March 31, closing down Haveeru. The temporary order to stop publishing was the result of an ownership dispute. On Saturday April 2, Haveeru was also ordered to shut down its news website.

The situation for press freedom and journalist safety remains unstable in the Maldives. On Saturday April 2, the Maldivian police confirmed that Ahmed Rilwan was abducted on August 8, 2014. The announcement came almost 18 months after the journalist was last seen returning home on a ferry from Male. In addition to that, last week, a draft defamation law was presented to the Maldivian parliament, which would see criminal defamation legalised only 5 years after it was decriminalised.

The IFJ demands immediate withdrawal of all charges against the journalists; and urgent action to amend all state actions contradicting to the principles of press freedom. The IFJ and the MJA also express serious concerns over the court orders closing down the Haveeru newspaper.

The IFJ said: “The actions of the Maldivian police on Sunday April 3 are a clear violation of freedom of expression and speech. The brutality of the police action during a peaceful demonstration highlights the declining safety situation for media workers and journalists in the Maldives.”

“The IFJ calls on the Maldivian government to end its crackdown on the media. While the IFJ welcomes the development in the case of Ahmed Rilwan, we demand more from Maldivian authorities to bring those responsible for his disappearance to justice.”