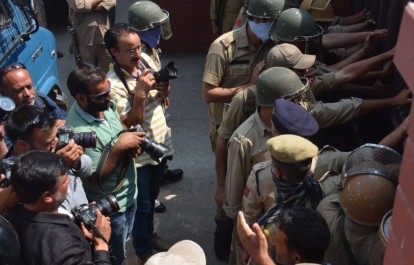 It has been a bad year for media in Kashmir. The current unrest that left 60 dead and thousands injured has also taken a toll on media. From raiding the printing presses to blocking the internet to newspapers, many methods have been used to muzzle the press.

On July 16 (Saturday) Kashmir woke up to no newspapers as the printing presses of major dailies had been raided, copies seized and some staff arrested. This was followed by an official gag, communicated by the government spokesman Naeem Akhtar, who also happens to be the Education Minister in the Peoples Democratic Party-Bhartiya Janta Party coalition government. Naeem Akhtar was clear that there is a ban though a “reluctant decision”.

“It is a temporary measure to address an extraordinary situation… In our opinion, there is an emotional lot, very young, out in the field, who get surcharged due to certain projections in the media, which results in multiplication of tragedies,” he was quoted by Indian Express as having said. He in a way also blamed media for fanning out the sentiments. As the ban on newspapers evoked sharp reaction with even Prime Minister Narendra Modi seeking details on the issue, the state government went on back foot, denying that there was a ban. But the media resisted and made the Chief Minister to “deeply regret” the decision.

Restrictions on media in different ways have been on since July 8, when Hizbul Mujahideen commander Burhan Wani was killed fanning the protests across Kashmir valley. Movement of media persons has been curtailed and smaller papers have almost seized their publication. The latest was when August 12 government blocked the internet services to major newspapers ahead of Pakistani and Indian Independence days. For three days the Internet connectivity was disrupted leading the numerous problem for newspapers in bringing out their publication.

Media blockade is nothing new to Kashmir. Since the outbreak of armed rebellion in Kashmir in early 1990, media in Kashmir has been working on a razor’s edge. A small community though has lost 13 of its members to bullets from the either side. Life threats, intimidation, arrests, censorship, and beating have been part of the daily grind through which an average journalist has been going. It is been difficult to operate from this highest militarized zone. Journalists have been the target of state and non-state actors. A journalist in Kashmir has failed to keep the warring sides happy. If an atrocity by the government forces is reported, he may be dubbed as “anti- national” and highlighting the violation non-state actors or extra-political activities of separatists would mean that he is “anti-tehreek” (anti-movement) or a collaborator. A sword hanging over his head in both cases.

When I was told about the raid on the press, I was not unnerved as this did not come as a shock in a situation that has engulfed Kashmir for last nine days. After the killing of most wanted Hizbul Mujahideen commander Burhan Wani, the valley has been in an unprecedented unrest reminding us of a similar situation in 2010 when 130 people got killed in firing by police and para-military forces in the attempts to quell the civilian protests against the Indian state. P

Putting an information blockade has been part of the state “strategy” in 2010 as well and the scene is rewinding this time. All the mobile services including data except the government-owned BSNL have been barred, cable TV is the off the air and finally the newspapers have officially been asked to stop the publication. A handful of government-owned Bharat Sanchar Nigam Limited (BSNL) broadband connections have been keeping the connection with rest of the world alive. It is learnt that BSNL services were also the target but that would cripple the official communication link and also created problems of the pilgrims who are on annual Amarnath yatra to the Holy Cave in Pahalgam woods in South Kashmir.

The newspapers have had a tough time in 2008 and 2010 public unrest when government forced them to suspend publications by putting restrictions. When Afzal Guru was hanged in 2013, copies of newspapers were seized in a similar fashion and not allowed to circulate.

With almost complete ban on social media the government has now chosen to close down the last source of information as well. Newspapers in any case are the institutions that would project the true picture before the readers. They would cross check the facts and not go on hearsay. By banning them a government, that is desperately grappling to normalize the situation, has opened up space for rumour mills to flourish that could aggravate the already surcharged atmosphere. When every means of communication is blocked, newspapers are the only source of information for Kashmiris. The ban was to keep the people in dark and not let them know about the gory incidents that were taking place in length and breadth of Kashmir.

As the ban, according to government was a reluctant decision to “ensure peace”; same does not apply to a vast section of TV media in India that is provoking the people by one sided and polarized coverage. The TV studios of certain channels turn into war rooms at the prime time and venom they are spitting against the minority community and in particular Kashmiris at this juncture is further contributing to the unrest in Kashmir. All the democratic spaces in Kashmir are choked thus furthering the angst that is already boiling the situation.

(The author, Shujaat Bukhari, is the Editor-in-Chief of the Rising Kashmir, the leading English daily published from Srinagar, Kashmir. He tweets @bukharishujaat)