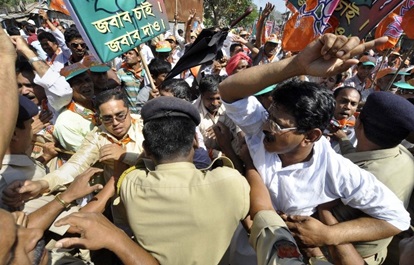 Tripura as we know this tiny land today is the third smallest (only 10,491 sq. Km with almost 37 lakhs people) state after Goa and Sikkim and situated in the north-eastern part of the country. Tripura plated a major role in the 1971 Bangladesh Liberation war and it was after this that it got its statehood. The liberation war in Bangladesh left crores of people to desert their home and take refuge in the tribal dominated state of Tripura. Interestingly, the tribals in the state are now a minority group with their culture and customs are under threat.

The media in Tripura is still dependent on the government for financial help, giving them an unprecedented upper hand to control press freedom in the state. As long as the political party in power is satisfied, the media is deemed to be okay otherwise there is an incredible pressure on the journalists as they have to not only endure insults but also face demotion in rank as well as being refused accreditation.

Journalists in Tripura are now facing threats from many sections of the society, including hooligans as well as the government and the police. For example, in 2011, many journalists were brutally beaten up by the police in a local college where the opposition party cadres were demonstrating against the state government. It is common for a journalist to be attacked, insulted or face excessive non-cooperation from the administration if there is a displeasing story published,

Aside from these personal attacks, there are two other challenges that working journalists in Tripura face: one is attaining an appointment letter. Apart from two newspapers, the rest of the newspaper organisations uphold a right to fire a journalist at their convenience. So far, the government has shown no interest to back the journalists or resolve this. The second is wages. No journalist enjoys the recommended wages regulated by the wage board (for the journalists) in the country. Notably, both men and women journalists are badly paid here in Tripura.

The presence of women journalists is almost non-existent in Tripura that the ratio of men and women journalists may be 90:10. While many women are now engaging in the profession, some even with university degrees, they are weak in their skills. Firstly, they do not have writing abilities and secondly, they lack the desire to develop further. There is no scope to train them because there are no training institutes here. Moreover, due to financial difficulties, the organizations lack the facility of inviting professionals into the state to impart training.