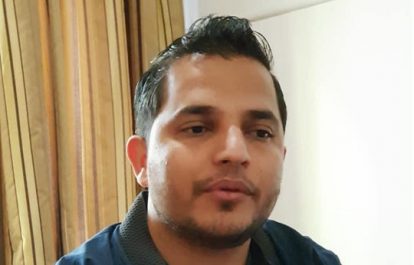 Umakanta Pandey, a Nepali journalist living in the United Arab Emirates (UAE) , was arrested by UAE police officials for social media posts he published, that criticised the Nepali Embassy in Abu Dhabi. The International Federation of Journalists (IFJ) and its Nepali affiliate, the Federation of Nepali Journalists (FNJ) condemn the arrest of Umakanta Pandey and urge the Nepali government to facilitate for his immediate release.

Pandey, a journalist affiliated with Ujjyalo Radio Network, was arrested on 15 February under cybercrime charges following a statement he published on Facebook when he was in Nepal in early January, in which he accused the Nepali embassy in the UAE of wrong doing in regards to Visit Visas in the UAE.

“The problem of visit visa in UAE will never be solved because the [Nepali] embassy itself is promoting and supporting the visit visa”, said Pandey. It is reported that more than 5,000 Nepali citizens travel to the UAE on a visit visa every month, with many suspected of engaging in illegal employment in hopes that they can remain in the UAE. The journalist claimed that he had substantial evidence regarding the misdeeds of the Nepali embassy.

According to the FNJ, following his arrest, a court in Dubai sentenced Pandey to three  months in prison and issued him a fine of  20,000 Dirham (approx. USD 5444). The FNJ have further revealed that  Pandey is facing additional difficulties with hiring a lawyer to represent him during his trial, as Nepali lawyers in the UAE are not willing to take his case for fear of persecution.

The FNJ met Nepal’s Minister of Foreign Affairs, Dr Narayan Khadka on March 3 to ask the ministry to facilitate release of Pandey. Following this discussion, the Nepali Embassy in Abu Dhabi also agreed to aid with Pandey’s case, despite earlier denying any involvement with the incident.

FNJ General Secretary, Roshan Puri, said: “Complaining to the Nepalese embassy about the status written while living in Nepal and arresting and imprisoning a Nepali journalist by the UAE police for cybercrime is against the universal recognition of freedom of expression and a direct interference on freedom of expression. FNJ draws the attention of the Government of Nepal, the Ministry of Foreign Affairs and the Nepalese Embassy in the UAE to investigate the incident and take immediate steps for the release of Pandey.”

IFJ said: “No one should be arrested merely for their opinion.  The IFJ urges authorities to immediately withdraw the charges against Umakanta Pandey, and calls on the Nepali government to facilitate his release, and take action on this blatant violation of media freedom.”