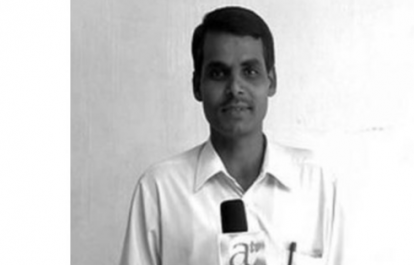 Nepal Police arrested Hareram Prasad Kurmi, one of the accused in the murder of Bara based journalist Birendra Shah 13 years ago. The International Federation of Journalists (IFJ) and its Nepal affiliates the Federation of Nepali Journalists (FNJ) and the Nepal Press Union (NPU) are relieved at the arrest of another alleged perpetrator and urge the government to bring all those complicit in the murder of Shah to justice.

Police arrested Kurmi from his hideout in Sapahi of Kolhabi municipality on September 10.  He is fourth person arrested in the connection with the case. Lal Bahadur Chaudhary Dhami, another person alleged to be involved in Shah’s killing is still a fugitive. According to Nepal Police they have been searching for Dhami for many years.

Shah, a Bara-based journalist affiliated with Nepal FM, Dristri weekly and Avenues television was kidnapped by then Communist Party of Nepal Maoist’s insurgents on October 7, 2007, and his body was found buried after 34 days in a nearby Tangiya forest area in Bara district. Shah had written about the former rebels’ alleged profiteering from timber smuggling and also their alleged assault and abuse of opponents.

Others accused of the killing, Manoj Giri, Ram Ekwal Sahani and Kundan Faujdar, have been found guilty and are serving jail terms after court sentenced them to life imprisonment and ordered that all their property be confiscated. During the Maoist insurgency in Nepal, a total of six journalists were killed and four journalists are still missing.

The FNJ General Secretary Ramesh Bista said: “As all the accused involved in the murder are not brought to justice, Nepali media fraternity has not realized a sense of security. The FNJ urges the government of Nepal to investigate the cases and punish the guilty.

The NPU General Secretary Ajaya Babu Shiwakoti said: “Although arrest of Kurmi can be taken as positive sign, Nepal government’s inability to punish all the murderers of Shah, even after 13 years, indicates the poor implementation of the UN convention to protect and defend journalists. NPU urges the government to punish the guilty regardless of their political affiliation.”

The IFJ said: “The IFJ continue to be deeply concerned about the climate of impunity for crimes against journalists and delays in tracking down and arresting the killers of BIrendra Shah.  The government of Nepal must not deviate from its commitment to  press freedom as enshrined in constitution of Nepal 2015. The IFJ urges authorities to bring all perpetrators involved in this murder to justice.”