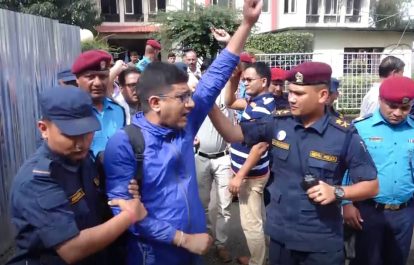 Union leaders from the Nepal Press Union (NPU) and the Federation of Nepali Journalists (FNJ) were among nine journalists arrested as they protested job losses in Kathmandu on Monday. The International Federation of Journalists (IFJ) joins its affiliate the NPU in deploring the arrests and demands an immediate investigation into the incident.

NPU general secretary Ajaya Babu Shiwakoti said: “NPU condems the removal of three journalists from Doti from their job and demands their immediate restoration into their job. We also demand that government create an environment that is conducive to the freedom of expression, a guaranteed provision in the constitution.

The IFJ said: “The arrest of nine union leaders and journalists for simply protesting the sacking of their colleagues is a deplorable act by Nepali authorities and threatens press freedom and right to association in the country. Journalists in Nepal are working in a volatile environment where they do not feel safe to report. This kind of environment only weakens press freedom and ultimately Nepal’s democracy.”