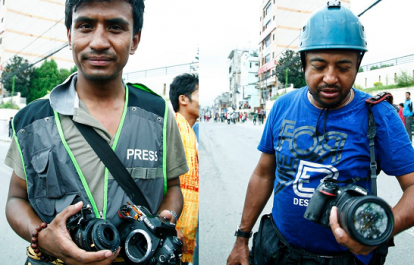 On September 15, 2015, I was at New Baneshwor, Kathmandu in front of the Constituent Assembly (CA) as there was a demonstration. The protesters were demanding that Nepal should be declared a Hindu state in the new constitution which the CA voted against.

The demonstrators tried to break into the ‘restrictive zone’ and clashed with police. My friend Ashok Maharjan, a freelance photojournalist, was hit on the chest with a stone pelted by the demonstrators and his lens and camera were broken. Two other photojournalists Prakash Mathema of AFP and Navesh Chitrakar of Reuters fell when the police used water canons without warning.

A few days earlier, policemen assaulted Bikash Rauniyar, a photojournalist. The police not only intentionally beat Rauniyar but also broke his camera. Police only left him when the locals started shouting at them for beating a media person. In another incident, Ram Sharaff, a photojournalist with The Himalayan Times daily, was threatened by protesters who hurled a petrol bomb in his house. Fortunately, it didn’t cause too much damage.

These incidents all happened within one week as demonstrations and protests broke out across Nepal. The protests broke out after Nepal’s political parties agreed on the contentious issues regarding federal structures in the constitution a month ago. There were demonstrations and protests by political groups disagreeing to the proposed structure, which turned violent in many parts of the country and more than 40 people have already been killed.

The FNJ has recorded dozens of incidents of violence against journalists and media and has said there are deliberate attacks and threats to media and journalists for their news coverage.

It’s an open fact that a photojournalist’s job is always critical and risky. We are always in between police and demonstrators. Our profession as photojournalist demands us to be present at the place of incident during the time of incident. We become an easy target of attack for both side.

Nepali photojournalism is still very young and most of the photojournalists are self-taught. Sadly, we are not trained in safety skills so wherever we are on duty, we know that we are not equipped to protect ourselves if any dangerous situation arises. I believe that many of such incidents could have been avoided if we were trained on safety and security.

Rauniyar, after the attack, said: “I saved money for five years to buy the camera and when I saw it was broken, the pain was greater than the pain in my body.”

(Bikash Karki is assistant photo editor of Annapurna Post daily and the General Secretary of the Photojournalists Club Nepal, an associate member of the Federation of Nepali Journalists.)