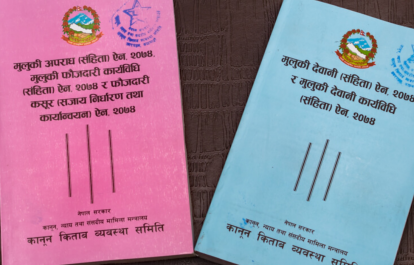 The Federation of Nepali Journalists (FNJ) and the Nepal Press Union (NPU), as well as other media stakeholders, have expressed concerns and demanded amendments to some of the provisions. According to FNJ and NPU, Provisions relating to privacy and defamation, contradict ‘complete press freedom’ and other rights of the citizens guaranteed by the Constitution of Nepal.

The FNJ’s Executive Committee meeting in Lumbini on August 8 and 9 urged the government to amend the contradictory provisions to ensure the Acts are press freedom friendly. The NPU jointly with the Center for Media Research – Nepal organized an interactive program on August 15 in which most of the participants expressed concerns over some provisions of Criminal Codes Act saying that they interfere with the journalism. The Nepal Media Society, the association of media owners, has also demanded amendments in the provisions.

FNJ’s former president Dharmendra Jha says: “The Act, if implemented as they are, will affect journalism as some of the new provisions in the Act are restrictive to freedom of expression and press freedom.”

The provisions that were highlighted as problematic are Sections 293 to 308. Those provisions relate to privacy and defamation; and if proven guilty, the accused faces up to three years of imprisonment. 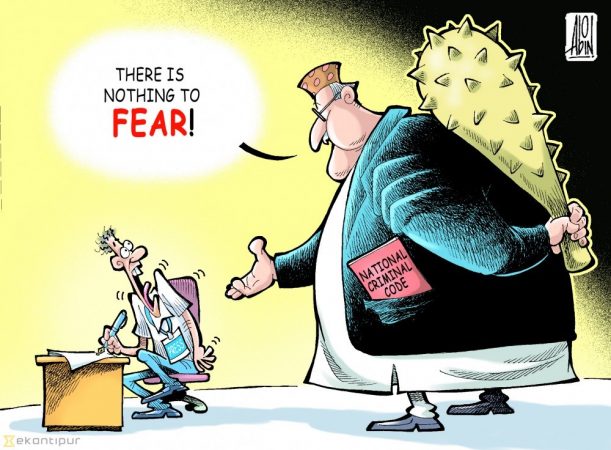 Editorial cartoon in The Kathmandu Post, by Abin, Republished with permission.

“There is a problem with the provisions on privacy and defamation. Despite being good overall, the problem is that the Act does not differentiate between the private and public life of people,” FNJ’s former president and the editor at the Center for Investigative Journalism (CIJ) Shiva Gaunle says. “Journalists should have the right to report and write about the public life of people.”

FNJ Secretary Ram Prasad Dahal says: “Beginning August 17, 2018, Nepali journalists will be working with a sword hanging over their head. The FNJ is very concerned and we will struggle for the rights of the journalists to ensure people’s rights to information is fulfilled.”

Ambiguity and scope for misuse

The major concerns over the Criminal Codes Act 2017 are on the ambiguity in the provisions that leaves enough scope of misuse.

Former Chief Justice Kalyan Shrestha, who was in the drafting committee of the Acts, claims that the new laws do not restrict press freedom. He says: “The journalist does not have to go to prison if the case is registered, s/he is only punished if s/he is proven guilty.”

Although the new Act is much more comprehensive than earlier laws, they still leave space for the misuses. The Act does not speak on media or press, thus there are chances of cases being registered for investigative stories and critical stories. The motive of journalism is to bring forward information intended to be hidden, and such work could be punished or at least journalists are harassed by registration of complaints.

Nepali media and journalists have witnessed the misuse of Clause 47 of the Electronic Transaction Act, which was used repeatedly against journalists to put them in custody for a few days, although in all, except in a couple of the cases, the journalists were found not guilty.

The author, Ujjwal Acharya, is the South Asia Coordinator of the International Federation of Journalists (FNJ).