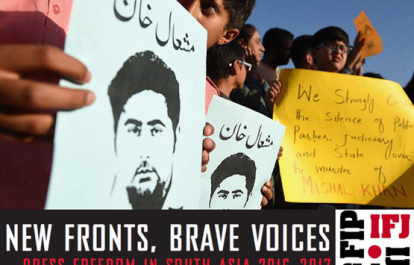 The 15th edition of the annual report documents the deteriorating press freedom situation, media rights issues, and national and regional activities to empower journalists to confront the challenges relating to press freedom of South Asia over the past year.

Nineteen journalists, bloggers and media workers were killed in the period under review (May, 2016 to April, 2017) with Afghanistan recording eight killings continuing to be one of the most dangerous countries for journalists. The killings of Pakistani journalism student Mashal Khan, bludgeoned to death in a mob attack on unfounded allegations of posting blasphemous contents online and Maldivian blogger Yameen Rasheed, brutally stabbed to death, indicate the worsening trend for the media.

“These killings horribly encapsulate the latest picture of threat and danger emerging from the violent discourse overtaking parts of South Asia, and more broadly around the world where authoritarian rule is eroding the very essence of democracy. With it, suffers press freedom and the public’s right to know,” the IFJ said.

This year’s press freedom report highlights the issue of internet shutdowns in South Asia, the world’s leading region on virtual curfews; and online harassment, especially that of female journalists along with special reports on impunity, and gender issues. The growing restrictions on the internet access have threatened the freedom of expression online as the governments continue to find new ways to put curbs; and risks of digital insecurity for journalists is at an all-time high. Pakistan, Maldives and Nepal have all introduced repressive laws restricting freedom of expression whereas Bangladesh continue to step ahead with mass surveillance and India sporadically enforces internet shutdowns in the name of ‘national security’.

While the overall situation looks bad, South Asia is also making progress and has recorded some positive steps. Bangladesh had a win against impunity, convicting the killer of photojournalist Aftab Ahmed, and Sri Lanka continues on its reform path with the enactment of Right to Information Act.

The IFJ added: “Around South Asia, as well as contending with democracies in transition and the broad economic challenges that come hand in hand, we see how journalism is fighting for its very existence and survival on numerous old and new fronts. While governments and extremists continue to put a megaphone to fear and less to reason and moderation, the stories of South Asia and, importantly, the work of its journalists is as vital as ever and must be defended defiantly and bravely.”