The New Normal Of Living With No Internet In Kashmir 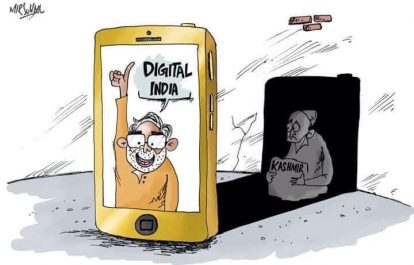 Composing an email can sometimes be more than typing and pressing a send button. For over an year now, the meaning of sending and checking emails has changed for me. It means hours of dictation on the phone to any friend who is connected to the internet and pestering them to keep checking your email regularly.

That’s how I worked for most of 2016. During the initial days of internet ban in July, all mobile networks except BSNL postpaid, were banned. So I had the task of finding a friend with BSNL postpaid or fixed line, internet connection and reliable enough to share my passwords with. Alternately, the nearest place where I could find internet connection was 12-15 kms away from my place and with no transportation available, 12 kms were nearly impossible to cover.

Months passed and the absence of internet became a new routine. No notifications popping up seemed relaxing for sometime. I remained busy with my digging into the dozens of files on my computer that I had downloaded but never accessed.

In the evenings, the lull would be broken by hooting young boys and men playing football and volleyball in an adjoining play field. They would come from all nearby areas to spend time here. The socialisation of women on the other hand was further shrunken due to the combined effect of hartal, curfew and internet ban.

The socialisation patterns of women are already restricted in terms of their participation in public life. Social media diminishes the boundaries on such participation and the only window to outside world for many women happens to be social media.

I, like many other women, would wait for some male member from the house to return and bring an update on what was happening outside. He would then narrate all that he heard from friends, shopkeepers and other fellows that lived nearby and also cherish his newly discovered friendships.

In September, I was supposed to write my exam for PhD admission. With all libraries closed, national newspapers unavailable and internet banned, I had no content to go through for the preparations. Among many questions that I failed to answer was the audience perception of a movie that had just released and I had not even heard of and as expected, I failed to get through the exam.

Nearly six months later, internet services were resumed. Logging into my social media accounts was most unpleasant this time and caused me anxiety. The hatred online seemed more intense than the hatred on ground. Possibly the hostility has always been there but social media makes it more visible and lets people be more vocal about it.

On Facebook, for example, there are numerous groups that claim to be facilitating the debate on Kashmir and other issues around. The admin or participants make posts followed by trails of comments opposing each other and finally blaming the admin of partiality. The disdained start a new group and the process repeats. The interactions, rather than furthering a debate, successfully divide the opinions and those with differing opinions get silenced easily.

However whether I like it or not, I have the right to choose to stay or quit from social media.

Prior to 2016, the internet ban came in little dozes. On Independence Day and Republic Day the networks are shut in totality, with 2017 Republic Day being an exception after a long time. Last year, the spell was longest.

Today, the mobile network ban has become the most predictable thing in Kashmir, which means on any given day, anyone in Kashmir needs to be ready with the alternatives. Despising my mobile in the past, today I posses 4 sim cards from different networks, one of which I use routinely and three of which happen to be my backups. Yet when internet was banned following the killing of Hizb commander Sabzar Bhat, I was again left with no option to access the internet.

As soon as the news of his death spread I knew the internet was soon going down and it did. I could only curse myself for not having gotten a fixed line connection. The following days went by refreshing pages and calling up friends with a broadband connection for updates and of course for writing my emails.

Late last evening as the services were once again resumed, mobile internet users were given a reason to be happy, with lifting of ban giving people a false sense of benevolence of the government. And once again working internet in Kashmir becomes a news.

The ban rejects the diversity of internet and its users. The Internet, to the authorities is synonymous with social media, the internet user a troublemaker and information a poison. It’s an invasion directly into our private lives. “What to read, what to speak , how to socialise and when to keep absolutely shut” is all that these gags are trying to dictate.

Meanwhile as social media remained banned during the month of May, I was asked by an interviewer to devise social media strategy for a campaign. Once again, I had very little to offer.

(The author, Arshie Qureshi, is a mass communications and journalism postgrad and a freelance journalist and a social worker based in Kashmir. She feels strongly about the need for creating liberal spaces to discuss issues for better understanding of gender.)

Originally published on Feminism in India and re-published here with their permission.