No justice for Maldives journalists 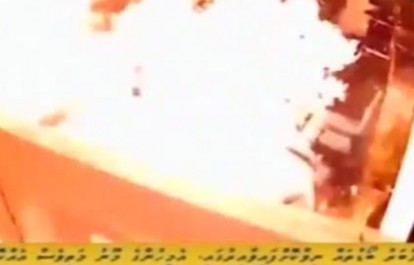 The trial of three Raajje TV journalists, charged with obstructing police officers while covering an opposition protest and a bomb scare, is set to close on November 8. If found guilty, the young reporters face up to a year in jail.

Mohamed Wisam, Leevan Ali Naseer and Adam Zareer, are the first Maldivian journalists to be prosecuted since the country adopted a democratic constitution in 2008. Assault charges were also filed against Hussain Fiyaz Moosa, the chief operating officer of Raajje TV, but the trial remains stalled since a first hearing in April.

Their prosecution stands in stark contrast to the lack of justice for crimes committed against the press, including the disappearance of Maldives Independent journalist Ahmed Rilwan, the arson attack on Raajje TV, the near-fatal beating of the station’s former news head, Asward Ibrahim Waheed, and the mass death threats sent via text messages to journalists.

Despite the failure to bring perpetrators to justice, the Maldives, a member of the United Nations human rights council, co-sponsored a resolution urging member states to ensure protection for journalists. Today, as the world marks the international day to end impunity for crimes against journalists, human rights groups have urged the Maldives to practice what it preaches internationally, describing the country’s support for the UN resolution while cracking down on the press at home, as “dark comedy.”

The resolution, approved unanimously in September by the 47-member human rights council and hailed as “ground breaking” by British press freedom group Article 19, urges all states to release arbitrarily detained journalists and reform laws that obstruct press freedom. It also calls for an end to the forced closure of media outlets and promotes the right of journalists to protect their confidential sources.

Andrew Smith, a legal officer at Article 19, said the Maldives government cannot divert attention from its national record on press freedom by sponsoring UN resolutions. “The situation for freedom of expression in the Maldives shows how wide the gap is between what the government says at the UN, and what it does at home,” he said.

“The government cannot whitewash impunity for disappeared journalists, arrests under archaic laws and raids on media houses by signing up to a UN resolution that condemns these kinds of free expression violations. The government must be asked what it will do to live up to its UN commitments to investigate these crimes, repeal abusive laws, and ensure a safe and enabling environment for journalists,” he added.

Marc Limon, the executive director at Universal Rights Group, a Geneva-based think tank on global human rights policy, says the resolution on safety of journalists is a good example of Maldives’ “massive disconnect” between practice and positions taken on key human rights issues.

Branding the Maldives’ actions as “dark comedy,” he added: “The Maldives advocacy suggests strong political commitment to freedom of assembly and to independence of the judiciary. Yet as we know, the Maldives labours under one of the least independent, most politicised, and most corrupt judiciaries to be found anywhere in the world. The impartiality of the Maldives judiciary was a key factor behind the 2012 coup d’état; and the supreme court was the main player in stealing the last Presidential election – setting arbitrary rules for the conduct of the poll, ordering the police to raid the Maldives Elections Commission, etc.

“The same is true of the resolution on freedom of assembly. The Waheed and Yameen Governments have routinely surpassed freedom of assembly, beating up protesters, avoiding the recommendations of the CONI to prosecute police who attacked protesters, and recently ignoring Maldives Constitutional provisions that state that the police need only be informed of planned assemblies.”

Jeffrey Salim Waheed, the Maldivian deputy permanent representative in Geneva, had a different take. “What we advocate for here [at the United Nations Human Rights Council] is what we are trying to achieve at home as well,” he told me in Geneva in September.

He claimed that the difference in practices employed by the Maldives and other developed countries is that the Maldivian government is still trying to figure out how to protect rights. He hesitated before emphasizing that this was his personal view.

In Malé, Wisam, the 22-year-old journalist who is facing jail, said he has no hope for a fair trial.

This blog has been re-posted from The Maldives Independent.