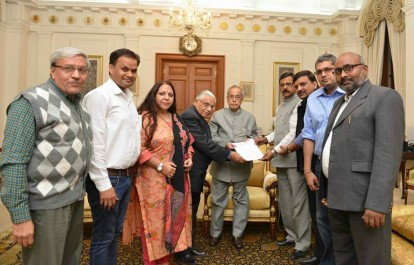 A high level delegation of National Union of Journalists (India) called on President of India Shri Pranab Mukherjee and demanded enactment of a Journalists Protection Law and constitution of Media Commission and Media Council.

Ras Bihari informed the President that the NUJ(I) has been demanding enactment of a Journalists Protection Law and constitution of Media Council and Media Commission for the last five years and it has staged several demonstrations also. On December 7, 2015 more than 2000 journalists from all over the country protested outside the Parliament and presented a memorandum to the Prime Minister Narendra Modi. He said the NUJ(I) state units also staged demonstrations at more than 100 places and presented memorandums to Governors and Chief Ministers. The memorandums to Prime Ministers were submitted through the authorities concerned at district level.

Referring to the attack on journalists in Patiala House court recently the NUJ delegation said such attacks can be curbed through a Journalists Protection Act. The enactment of the Act will help in speedy action against the culprits and the mediapersons will be able to work more freely under the protection of the Law.

Dr Trikha apprised the President of the necessity of constituting the Media Commission and Media Council. He said the nature and the scenario of the media have totally changed after the second Press Commission Report submitted in 1982. Hence, there is dire need to study the ground reality of the media today through a Media Commission.

Working journalists in national capital New Delhi as well as all over the country are extremely concerned at the rising trend of physical assaults on them and their killings in offices, homes and in the streets over the last several years. For the last over 15 years, the free and fearless pursuit of the profession to expose the faultiness of the state and the society, have met with the proverbial shooting of the messenger rather than attending to the message itself. Attacks are mostly carried out by individuals and groups often supported and backed by political parties and influential persons wielding power, who fear exposure of their wrong deeds and true selves would jeopardise their hold on the lever of power and influence.

Over 200 attacks on journalists have been documented in different States in the recent past. In Assam alone, for instance, at least one journalist has been fatally attacked every year during the past 14 years for refusing to file report as per the instructions of either the terrorists or the police. Last year in Shahjahanpur (UP), a posse of policemen attacked the house of a journalist, who had exposed the misdeeds of a local politician. Reports of similar attacks are flowing in from most states. The attackers are sometime the hired bad characters of the localities behind whom the actual perpetrators seek to hide their identity. Many a time the journalists who insist on doing their duty by the public are sent threatening letters or calls, but the NUJ(I) salutes them for refusing to yield to such threats and placing their lives on the line of their public duty as the watchdogs of society and public interest. In Assam, for instance, our members rejected the demand of both militants and the authorities to report as dictated by either party even as many were silenced by the practitioners of the gun culture.

The situation is no different in the naxal-affected areas. It has worsened with the rise of what is called ‘conformance’ in political parlance, threats from mafias that grab land and other resources with political support, blind hero-worship of political personalities and the general atmosphere of intolerance and appeasement. Reporters, cameramen and other media personnel are always exposed to vandalism and physical assaults by groups feigning victimisation. The police do not intervene in time or effectively—more often they reach the spot much after the occurrence despite getting informed. In many cases as in the Shahjahanpur incident, it is the police, who are acting to silence the journalists in order to suppress truth.

The National Union of Journalists (India) and its affiliated State units have on different occasions brought it to the notice of the authorities concerned and sought immediate redressal. But, we regret to state that such individual instances are generally being dealt with as merely a law and order issue, and are invariably lost in police records sans any concrete action. Everyday, journalists are facing new types of threats. The situation has become so drastic and critical that it now requires drastic solutions to protect journalists, which only the Central Government and Parliament can provide.

We take this opportunity to make it very clear that we are not asking for police protection for every working journalist.

The lack of a specific legal mandate to the authorities responsible for maintaining law and order to protect working journalists and other media staff compels us to demand protection from vandals and mafia-paid criminals for our tribe. To obviate this lacuna and demand entitlement to protection against physical assaults the journalists need a specific and comprehensive law to be enacted. There is need for a comprehensive Journalists Protection Act with clear provisions of registering complaints in police stations on intimidation, attacks or torture of journalists and also that all such complaints should be investigated by a SP/DCP level police officer. Failure to nab the culprits should be turned into a black mark on the concerned police officer’s ‘Performance Record’.

We also want that the investigation of all such complaints should be conducted within two days and action taken/ensured against the culprits. Moreover, whenever a journalist is assassinated or attacked, the case should be heard in a fast track court to ensure timely justice. It is essential keeping in view the fact that no action is taken against culprits for months and sometimes years even after registration of FIR.

It is imperative to mention here, as also demand, that in grave situations of any type the mediapersons covering them should not be treated as crowd. The police should be directed to help and provide complete information to the media so that all concerned persons get correct information.

A rising trend has been noticed in the recent past that racketeers – social, commercial as also religious – have started launching newspapers with the twin nefarious designs i.e. to become self-appointed editors or to put a ‘YES MAN’ of their choice as dummy editor to misuse the privileges to their benefit as also to be fool the masses by casting their spell over them. The most funny side of such ‘editors’ is that they have no professional standing.

The NUJ(I) condemns such racketeers and, to protect the professional ethics and standards of Indian journalism, demands that the definition of a journalist should be described in unambiguous terms in the proposed Journalists Protection Act. The NUJ(I) is determined to press for such national legislation.

Keeping in view the present media situation, the unhealthy trends in both the print and electronic media and the new challenges of the online media as well as the emerging trends in various sections of society impacted by the media, we feel the Government of India should take early steps to set up a Media Council to help, guide and make the fourth estate strong and ethical. The Government can summon various journalists bodies for consultation regarding provisions of the Media Council. However, alternatively, the present Press Council Act could be amended to include in its scope electronic media.

Newspapers, in most cases, apparently on the behest of their owners have stopped reporting Press Council’s decisions as they often tend to expose the weaknesses and creeping viruses in the Press. In electronic media, the so-called publishers’ regulatory bodies have been ignoring the emerging basic trends and only dealing with peripheral wrong doings. The Central Government as well as State governments are making either desultory or politically motivated moves in their relationship with media. The Centre’s weakness was recently exposed when it quietly withdrew instructions to the electronic media in the context of the public concerns about certain events in the TV coverage.

The NUJ(I), therefore, strongly stresses the demand for Media Council being set up by a new law expanding the Press Council legislation to take care of the emerging media environment. We want the provisions in the proposed Media Council, which not only helps in keeping a watch on the media but also protects the interests of the working journalists. Such an effective body can be created within the Journalist Protection Act only.

We are sure that you will agree with us that unless journalists are free to fearlessly pursue the truth the entire edifice of democracy may collapse. The strength of the edifice is the relentless exposure of the reality behind the showpieces of society. This constitutes the public interest. And it is working journalists as the trench soldiers of the public interest who alert the people of the truth. The anti-social elements in many sectors are hell bent on blocking this vital function of exposure. Hence, it is the bounden duty of the State to ensure the environment that enables working journalists to pursue their professional work freely and fearlessly.

The enactment of a Journalists Protection Act is an immediate necessity. The Central and State Governments at the highest level must immediately start consultations with journalist representatives to place such a legislation on the statue book that makes public authorities sensitive and responsible specifically to this need.

The NUJ(I) staged a massive dharna and demonstration at New Delhi on December 7, 2015 and submitted a memorandum of its demands to the Prime Minister. The NUJ(I) demanded immediate enactment of a Journalist Protection Act, creation of Media Council and constitution of Media Commission and immediate curb on the retrenchment of journalists in media houses. Its state units had already submitted memorandums to Chief Ministers, Governors and Prime Minister through the authorities concerned in 22 states capitals and also at over 100 district headquarters. A large number of journalists from Delhi, Uttar Pradesh, Haryana, Chandigarh, Punjab, Uttarakhand, Madhya Pradesh, Rajasthan, Bihar, Odisha, Jharkhand, Maharashtra, Chhattisgarh, Assam. West Bengal, Tripura, and many other states joined the protest. Earlier also the NUJ(I) and its state unit has submitted memorandums to earlier government regarding above demands.