Official censorship by Indian government on the rise 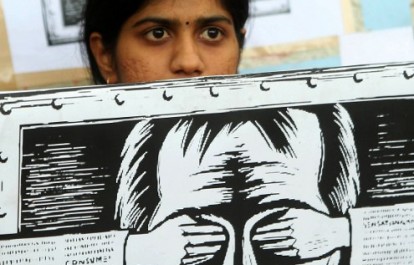 Today (August 21, 2015) marks the expiry of the 15-day deadline issued by India’s Ministry of Information and Broadcasting on August 7 to three television channels – NDTV 24×7, ABP News and Aaj Tak – to show cause why action should not be taken against them for broadcasting shows on the death penalty to Yakub Memon, convicted in the 1993 Mumbai bomb blast cases. The government notices said that the shows allegedly violated sections of the Programme Code of Cable Television Network Rules, 1994.

The notices to the television channels came in the wake of intense media coverage over the issue of the death penalty awarded to Yakub Memon, who was convicted in the 1993 Mumbai bomb blasts case. Memon, who was a brother of the prime accused Tiger Memon, had returned to India in 1994 to face trial in the case and was convicted in 2007. Memon had appealed for clemency and he was hanged on July 30, 2015.

According to reports, two of the television channels – Aaj Tak and ABP News – broadcast phone-in interviews with underworld gang leader Chhota Shakeel in which the gangster claimed that Yakub Memon was innocent and that he felt that justice was not done in the matter. The third channel, NDTV 24×7, had aired an interview with Memon’s lawyer about the issue of death penalty.

The three television channels have already made known their protests at the notices. Journalists’ organisations have responded swiftly by issuing statements condemning the government’s attempts to curb debate and discussion. While the Editors’ Guild said that discussions on Memon’s execution were in the nature of political speech and should not be curbed, journalists’ organisations, including the Press Club of India, the Mumbai Press Club, the Indian Womens’ Press Corps, the Delhi Union of Journalists and the Brihanmumbai Union of Journalists condemned the action as one that ‘betrays an insecurity and intolerance on the part of the government’.

The notices were issued for violating Section 1(d), Section 1(g) and Section 1(e) of Rule 6 of the Programme Code prescribed under the Cable Television Network Rules, 1994 wherein no programme should be carried out in the cable service if it ‘contains anything obscene, defamatory, deliberate, false and suggestive innuendos and half truths’ (Sec 1 (d)), is likely to encourage or incite violence or contains anything against maintenance of law and order or which promote-anti-national attitudes (Sec 1 (e)) and ‘which contains aspersions against the integrity of the President and Judiciary’ (Sec 1(g))

The debate over the hanging of Yakub Memon raged over the issues of procedures, the last-minute legal interventions by senior lawyers of the Supreme Court, the ethical and philosophical discussions on the death penalty, the plight of both Memon’s family as well as the sentiments of victims and survivors of the bomb blasts. While there is, as yet, no analysis of media coverage of the days preceding the hanging, it was clearly a story the media covered quite extensively. To accuse the media of promoting anti-national attitudes or inciting to violence or even casting aspersions on the judiciary and the office of the President is far-fetched and implausible.

Unfortunately, while the show cause notices did elicit protests, what escaped attention was the very arbitrary and sweeping guidelines laid out in the programme code. Take, for instance, clause 6 (m) of the code, which says that no programme should be carried in the cable service if it :

Contains visuals or words which reflect a slandering, ironical and snobbish attitude in the portrayal of certain ethnic, linguistic and regional groups

Snobbish? Ironical? Can these seriously be something a programme code prohibits? If so, it would apply to almost all the shows on television, including characters in a reality shows like the Big Boss or the sundry comedy shows or even the family soaps where the women characters routinely sneer and lift eyebrows meaningfully at one another to suitably threatening music!

It’ll be interesting to see if the government ignores the storm of protests that followed the notices and continued with its attempts to curb free discussion. Indeed, if the recent action of this government is any indication, ham-handed censorship seems to be the only way it deals with any dissent. Leave alone political issues, even pornography is taboo, as the government blocked 857 websites in August.

As it is, even reporting on the protests drew the government’s ire, as the Director General (news) of All India Radio, the official radio broadcaster, was pulled up for failing to obtain clearance to report the statements of the Editor’s Guild condemning the notices to the television channels! Already, the government has imposed restrictions on media access to certain important ministries and designated an officer to disseminate information to the media.

The Modi government came to power on the promise that ‘ache din (good days) will come, but forgot to add that if it did come at all, it would be at the cost of ‘sache din (truthful days). Welcome to the new Ministry of Truth.

Geeta Seshu is a Mumbai-based journalist, a member of the Brihanmumbai Union of Journalists and also the Consulting Editor of the mediawatch website The Hoot