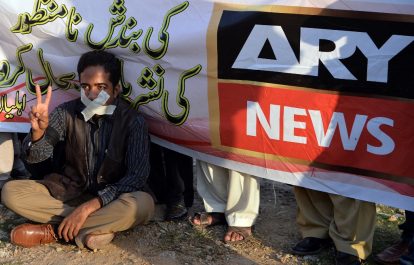 An executive of Pakistani broadcaster ARY News was arrested on sedition charges on August 10, with several more media workers named in First Information Reports (FIRs), following the interruption of the station’s broadcast on August 9. The International Federation of Journalists (IFJ) and its affiliate, the Pakistan Federal Union of Journalists (PFUJ), call on the Pakistani authorities to immediately cease all legal action against the ARY News employees and withdraw the transmission suspension orders.

According to the PFUJ, Ammad Yousaf, Senior Executive Vice President of ARY News, was arrested on sedition charges on August 10. Sources close to the detained said Yousaf was arrested without a warrant by plain-clothed officers.

Representatives of ARY News said the broadcaster had attempted to contact the provincial Government of Sindh about the charges, but no response had been given.

According to reports, the suspension, which impacted viewers across India and Pakistan, came hours after the media organisation stated that the Pakistan Muslim League-Nawaz (PML-N) had initiated a media campaign to portray the Pakistan Tehreek-E-Insaf (PTI) and its leader, Imran Khan, as ‘anti-armed forces’.

PEMRA claimed the material aired was “seditious” and represented “a clear and present threat to national security”. Shahbaz Gill, senior PTI leader, was arrested shortly after ARY News was taken off air and was charged with inciting violence against state institutions.

The station has previously said that the PML-N’s strategic media unit, created on June 27, is advancing a narrative that portrays Imran Khan as an anti-army politician. ARY is one of Pakistan’s most popular media channels and has been suspended on multiple occasions following coverage of the PTI party and criticism of the ruling PML government.

PFUJ President GM Jamali and Secretary General Rana Azeem said: “If somebody has done something unlawful, a legal notice may be served; otherwise, journalists’ jobs may be jeopardised. If the suspension orders are not lifted, the PFUJ will protest throughout Pakistan.”

The IFJ said: “PEMRA’s suspension of ARY News’ transmission, the arrest of Ammad Yousaf and the registering of FIRs against several ARY News employees are blatant acts of legal harassment and censorship against Pakistan’s media. The IFJ urges the Pakistani government to safeguard the rights of all journalists and media workers and ensure freedom of expression and freedom of the press are maintained in accordance with the Constitution of Pakistan.”