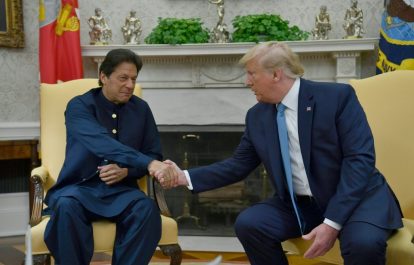 Pakistan’s private broadcaster Geo News was forced off air and its channel number abruptly changed in many parts of the country during Pakistani Prime Minister Imran Khan’s visit to the US. The International Federation of Journalists (IFJ) condemns this media blockage and calls on the authorities to end the restrictions on press freedom.

According to the broadcaster’s managing director Azhar Abbas, the channel was blocked without any notice or explanation from the country’s media regulator, government, or military.

This is not the first time Geo News has been put under political pressure. On July 1, Geo News was forced to pull off an interview with Pakistan’s former president within minutes of commencing broadcast, drawing criticism of high level interference and attempt at controlling Pakistan’s media. Last year, the channel was blocked in major parts of the country, including Karachi, Lahore and Multan. On February 1 journalists from Geo News staged a protest in newsrooms across Pakistan demanding unpaid salaries of over three months. The issue remains on-going.

“Pakistani media is going through an extremely tough time with increased pressure from anti-democratic forces that are trying to silence the media,” said Pakistan Federal Union of Journalists (PFUJ) president GM Jamali in a statement.

The IFJ said: “Blocking Geo News from broadcasting is a clear indication that censorship remains a serious issue in Pakistan. Combined with all other recent developments against media freedom, we are concerned Pakistan’s media is increasingly faced with restrictions by its government. We condemn such developments and demand authorities to rectify the situation.”