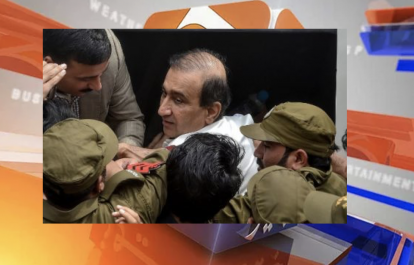 Pakistan Electronic Media Regulatory Authority (PEMRA) ordered cable operators to relocate Geo TV’s broadcast on March 13 in apparent retaliation for the network’s coverage of the arrest of its editor in chief.  The International Federation of Journalists (IFJ) and the Pakistan Federal Union of Journalists (PFUJ) urges the authority to lift its order.

Just a day after the arrest of the editor-in-chief of the Jang and Geo Group, Mir Shakilur Rahman, PEMRA issued a show-cause notice on March 13 to Geo News for “airing unipolarity of views in its news bulletin and programmes” and for discussing “under investigation/trial matters barred under PEMRA laws”.A separate PEMRA order also requested cable operators to block the Geo TV broadcast or move the channel to last on the list of channels. PEMRA accuse Geo TV’s bulletins of biased in the reporting of the arrest of Mir Shakilur Rahman by Pakistan’s National Accountability Bureau (NAB). A show-cause notice ordered Geo to appear for a hearing on March 20.

Geo News, director news Rana Jawad confirmed the link between the arrest and attempted shutdown of Geo TV’s broadast. “This is a manifestation of the conspiracy to shut down, silence and end media,” he said. Geo has said that the channel was blocked without any notice or explanation from Pemra, government, or military.

The Pakistan Broadcasters Association (PBA) condemned the relocation of Geo News and that the action had been taken by Pemra without assigning a reason or giving it a hearing. PBA demanded Pemra restore the channel immediately and specify any complaint against the channel or if it had violated the code of conduct.

The PFUJ said it talked to PEMRA and the prime minister’s adviser from the Federal Information Ministry, Dr Firdaus Ashiq Awan, who denied issuing any directive was given to block the broadcaster. Cable operators have allegedly been threatened with legal action if the order is not complied with yet some local cable operators had still refused to comply to the PEMRA order. As a result, the Geo’s broadcast has only been partially blocked or relocated in some parts of Pakistan.

While it said PEMRA was within its rights to pursue action, PFUJ said: “We understand that this may affect the rights of the media workers associated with the said news channels. We stand by them and will do everything to restore the affected channels as soon as possible.”

The IFJ said: “The blocking of Geo TV is a clear and blatant abuse of power and censorship of a key media outlet for covering an issue in the public interest. IFJ calls for a prompt investigation into the legality of such an order and PEMRA is strongly urged to revoke the restrictions on Geo TV with immediate effect.”