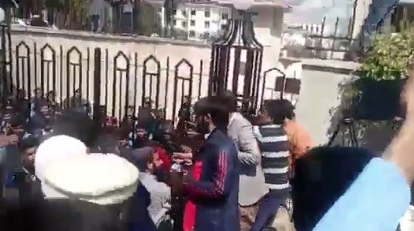 A Geo News cameraperson was attacked covering the visit of the Chairman of the Pakistan People’s Party (PPP) to the National Accountability Bureau in Islamabad on March 20. The International Federation of Journalists (IFJ) joins the Pakistan Federal Union of Journalists (PFUJ) is strongly protesting the attack on the journalist and demanding an investigation.

Shrazi Gardezi was covering the visit for Geo News when he came under attack by workers of the PPP. The attack was caught with his own footage.

PFUJ president GM Jamali said journalists and media workers in Pakistan continue to face intimidation, threats and attacks in attempts to silence and gag the media. Financial insecurity is becoming the latest tool of attack.

“PFUJ has never backed down in the face pressure tactics and threats. PFUJ and UJs will increase the momentum of the protests which began in January 2019 to protect the rights of journalists and freedom of expression and media. We will increase pressure on the authorities to ensure security to the media,” Jamali said.

The IFJ said: “We condemn the attack on cameraman Shirazi Gardezi and calls the authorities to fully investigate and prosecute those who commit crime on journalists. We also demand the government to ensure of the safety of journalists in the country. Immediate action is needed to stop the physical assaults on journalists as well as media workers.”