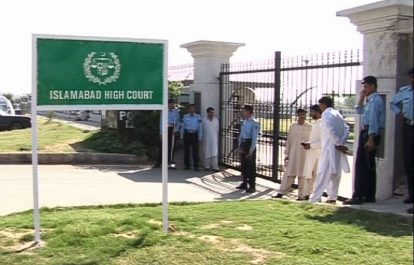 Ehtisham Kiyani, a reporter for Channel 24 was arrested on false charges for allegedly bearing weapons in Islamabad’s High Court. The International Federation of Journalists (IFJ) and its Pakistan affiliate the Pakistan Federal Union of Journalists (PFUJ) condemn his arbitrary arrest and call on authorities to investigate the misuse of law to harass journalists.

Police officials deployed for the security of the Islamabad High Court arrested Kiyani on September 23, accusing him of allegedly carrying weapons as he arrived at the court. The journalist was present to cover a court case involving the Pakistan Muslim League-Nawaz (PML-N) vice-president, Maryam Nawaz, and her husband, Captain Safdar, in relation to the long-running Avenfield Reference case. The high-profile corruption case against Pakistan’s former Prime Minister, Nawaz Sharif, and his family dates back to 2016 Panama Paper relevations about the family’s purchase of four flats in Avenfield House, Park Lane, London.

It is not clear why the journalist was targeted, but he was taken to Ramna police station, Islamabad, for further questioning.

Islamabad High Court Chief Justice, Athar Minallah, issued an order for the immediate release of the journalist. He was released an hour later.

Upon his release, Kiyani reported that he had been mistreated, tortured and harassed in police detention. His mobile phone and other belongings were confiscated and he was not able to contact his family.

The arbitrary arrest or abduction of journalists and their release following a public outcry has been regularly documented in Pakistan. Most recently, journalists Asad Toor and Bilal Farooqi were arrested on September 11 on allegations of publishing ‘objectionable’ and ‘derogatory’ material online. They were released on September 12 and 16 respectively.

PFUJ Secretary General Rana Muhammad Azeem said: “The PFUJ strongly condemns the arrest and urges the authorities to make sure that such the arbitrary arrests do not happen in future so that media workers could perform their duties without any fear.”

The IFJ said: “The arbitrary arrest of journalists and media workers on questionable and false charges is an abuse of power and the law and a direct violation of journalist rights. The IFJ calls for greater scrutiny of such cases and for perpetrators to be disciplined.”