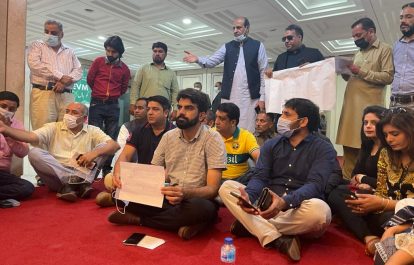 Hundreds of Pakistani journalists participated a ‘sit in’ demonstration from September 12-13, united in protest against the proposed controversial Pakistan Media Development Authority (PMDA) bill. The International Federation of Journalists (IFJ) and its Pakistan affiliate, Pakistan Federal Union of Journalists (PFUJ) said the government must heed the calls of media and open a transparent and industry-engaged process of review of the existing regulatory framework before hitting the media with the brute force of a single regulatory government-created response.

Protesting journalists began gathering outside the National Press Club on September 12, before marching to Pakistan’s Parliament, where they urged the government to withdraw the proposed controversial PMDA bill. The rally continued through to the following day as a parliamentary session began discussions to approve the bill. The bill outlines plans to repeal all existing media laws in Pakistan, replacing them with a single PMDA ordinance. If enacted, the PMDA will have sole authority to regulate all film, electronic, print, and digital media.

Opposition to the PMDA has come from a spectrum of media workers and journalist bodies, including the All Pakistan Newspapers Society, Pakistan Broadcasters Association, Council of Pakistan Newspaper Editors, Pakistan Federal Union of Journalists, Association of Electronic Media Editors and News Directors, Human Rights Commission of Pakistan, Pakistan Bar Council, Supreme Court Bar Association Pakistan, political parties and international media and human rights watchdogs. As well as protesting media workers from across the spectrum of the industry, also joining the protest were key leaders and senators from eaders of the Pakistan Muslim League Nawaz (PML-N), Pakistan People’s Party (PPP), the National Party, and PML-N, who boycotted the house-session.

Pakistan’s information ministry says fake news on social media needs to be addressed at all costs and PMDA is, in part, a response to a so-called genuine need. But the IFJ is gravely concerned that a clear and transparent process of industry consultation has not been followed, nor has a full draft of the proposed legislation been made publicly available for industry consultation and input.

In its annual South Asia Press Freedom Report, the IFJ has reported on the Pakistan government’s penchant for excessive restriction and control of independent media in the country as being one of the most repressive in the region, while industry critics declare the controls as worse than when the country was under martial law. Parliamentary reporters were banned from sitting in the press gallery for the joint session this week.

The PMDA bill is criticized for its provisions that empower the government to nominate 12 members of the authority, including its chairperson and five ex-officio to be top bureaucrats. The proposed legislation also permits the government to issue directives directly to the PMDA. A third criticism of the bill is the concentration of all powers within one agency, with the PDMA having the power to grant, cancel or extend licenses to all kinds of media outlets in Pakistan, which would open the possibility of direct targeting at media houses critical of government.

In June, a joint meeting of Pakistan’s representative media organisations including All Pakistan Newspapers Society (APNS), Pakistan Broadcasters Association (PBA), Council of Pakistan Newspaper Editors (CPNE), two factions of the Pakistan Federal Union of Journalists (PFUJ) and the Association of Electronic Media Editors and News Directors (AEMEND) rejected the concept of the PMDA.

The PFUJ said any revision or new media regulation must ensure job security and the regular payment of wages for working journalists.

The PFUJ said it would: “Oppose the PMDA, if its provisions are found against the freedom of speech and expression. PFUJ also opposes any untoward restrictions to the media houses.”

The IFJ said: “The fact is that the industry and journalists have been shut out of a determination or clear process of any proposals to reform or strengthen the media industry in Pakistan is extremely worrying.”

The IFJ says a full and transparent process is needed with the full proposal on the table for due discussion and engagement.

The IFJ said: “It is little wonder the media is fighting to protect laws that have been so hard fought and won. At a time when Pakistan is facing declining media freedom in the eyes of the world, if this regulation is forced through it will only further blight the reputation of the country in terms of ever-increasing media control. The IFJ strongly urges Pakistan’s government to listen to the industry and take a step back in this process to consult and engage with the media on genuine needed reform to support a sustainable and strong media into the future.”