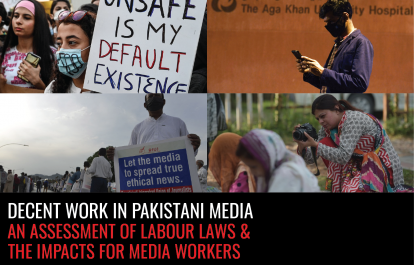 Despite the existence of a long-established and extensive constitutional and legal framework, Pakistan’s media workers face a redundant and ineffective labour law system that is failing to protect essential worker rights. The International Federation of Journalists (IFJ) and its affiliate the Pakistan Federal Union of Journalists (PFUJ) said there is a dire need to review and overhaul the legal framework governing the rights of media workers in Pakistan where it is chronically failing them.

The new report, commissioned by the IFJ and developed by the Institute for Research, Advocacy and Development (IRADA), launched on July 13. Decent Work in Pakistani Media: An assessment of labour laws and the impacts for media workers comes in the wake of the continuing crisis of non-payment of wages, coupled with massive job losses and widespread job insecurity within the once-burgeoning Pakistan media industry.

Job losses, pay cuts and delayed salaries for journalists and media workers, which had already risen as a critical issue by 2018, snowballed into crisis proportions in the year of the pandemic. Over 8,000 of Pakistan’s estimated 20,000 journalists lost their jobs in 2020 alone, according to the IFJ. This was partly due to lifeline public sector advertising for the media industry cut by over half and pandemic disruption of the media economy.

The landmark assessment of Pakistan’s existing and applicable labour, industrial and worker laws was commissioned by the IFJ to provide better understanding of the status, facts, qualities, shortcomings, and deficiencies in the legal framework relating to labour rights in Pakistan. The report looks at Pakistan’s legislation surrounding labour laws and their impact on media workers in the region.

IRADA said: “In the post-18th Constitutional Amendment era, there was a need to thoroughly review legal framework governing rights of media workers and determine the shortcomings, and deficiencies therein. Nevertheless, this IFJ supported initiative enabled us to identify weakness of the legal system and provided opportunity to devise a plan of actions for legal reforms for a decent and safer work environment for media workers in Pakistan.”

Specifically, the report highlights weaknesses in the labour rights landscape in particular reference to:

In its 2020-21 press freedom report, Truth in a Time of Contagion, the IFJ reported on the Pakistan government’s acknowledgment that it could have better handled the media crisis by partly clearing dues and inviting media industry associations Pakistan Broadcasters Association, All Pakistan Newspaper Society and Council of Pakistan Newspaper Editors to devise a strategy but failed to follow up, leaving the industry mired in crisis.

The media labour crisis has not just targeted smaller media players, but also the giants of Pakistani journalism which laid off journalists and staff in droves such as Jang, Dawn, Dunya and Express. Most offered a stark choice for the remaining staff: take 50 percent or higher pay cuts or leave. Arbitrary retrenchments and illegal terminations by media managements and owners in complete violation of the laws governing contracts and employment were commonplace.

The report was written by IRADA’s research team, consisting of Muhammad Aftab Alam as lead researcher and Amir Mustafa, Saqib Bhatti and Varsha Arora as research associates.  It used expert analysis and multiple interviews from key players across Pakistan’s media landscape and practically illustrates how media legislation and implementation can improve to establish true freedom of the press and equal rights for all media workers in Pakistan.

The key findings of the report, includes recommendations and an action plan which impresses the need to further include women and other marginalised groups within a stronger legislative framework, to reform existing labour laws, and implement adequate measures to ensure the safety of all journalists.

The PFUJ said: “The PFUJ has praised the IFJ effort to have a rapid study of the labour laws in Pakistan with emphasis on media worker. It is a good report and a document to be used in future for reference. While the labour laws are in place in Pakistan the real lacking lies in the execution and implementation of the laws while justice is delayed in almost all the cases. Thousand of appeals lie pending in different labour courts and authorities which is very alarming.”

The IFJ said: “We are pleased to launch this report with IRADA and to help provide solutions to improve the media landscape in Pakistan. It is essential that all of Pakistan’s media workers are given proper pay for their work, a safe environment to work in and laws and an enforcement system that allows Pakistan’s media to rise from the ashes of the Covid-19 pandemic.

Reform of existing labour laws is vital to regulating the digital media market that has flourished in Pakistan in recent times and to providing digital and freelance journalists with a safety net.

Unions in Pakistan need to reform their constitutions to allow digital journalists and freelance journalists to join their unions and their structures to advocate for those groups. The NIRC, wage boards, the NECOSA and all Industrial Relations Laws in Pakistan must be reformed to include language that reflects women and all members of society.

The wage board and ITNE must become more consultative institutions, which don’t simply reflect the government’s perspective. Government agencies must be better resourced so that they can properly implement existing labour laws and make employers comply with their legal duties. Finally, journalists must be kept safe through the creation of federal and provincial legislation that safeguards workers during this tumultuous time and beyond.”

Read the online report here: Decent Work in Pakistani Media: An assessment of labour laws and the impacts on media workers.