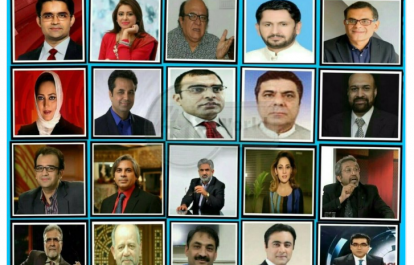 The social media hashtag #ArrestAntiPakJournalists began spreading on the morning of July 4, following a tweet by an account claiming to be the leader of a group called Imran Khan Warriors (derived from the name of Pakistan’s Prime Minister). The account toldits followers to “grab the keyboard and start trending” along with photographs of journalists and anchors alleged to be“members of pro-India, anti-Pak media group.” In less than 24 hours, the hashtag accumulated at least 57,000 interactions, according to Digital Rights Monitor.

Following the hashtag call, the campaign saw the viral spread of hate speech messages toward journalists, some urging for journalists be hung or arrested. Journalists were also called prostitutes and traitors of the country.

The Tweets targeted media seen to be critical of the ruling Pakistan Tehreek-e-Insaf (PTI) party and the military, including high profile journalists Hamid Mir and Asma Shirazi.

PFUJ expressed concerns on the shrinking space for critical debate in the country and that efforts censoring the media and attack journalists had become a disturbing norm.

PFUJ president, GM Jamali said: “As if it wasn’t enough that journalists across Pakistan are being covertly threatened, now the people behind these threats have become bolder as seen by the social media trend #ArrestAntiPakJournalists. Many tweets displayed pictures of prominent journalists with this hashtag.”

The IFJ said: “We are deeply concerned by the online threat to journalists in Pakistan. Too often social media is being manipulated to spread hate speech and threats to the media and put the lives of individual journalists in peril. We urge the authorities to take immediate action and increase effort to protect journalists and call on Twitter to do more to remove and censure rogue accounts responsible for spreading hate speech.”