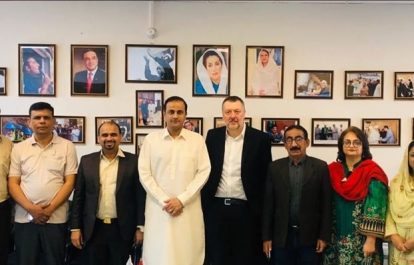 The International Federation of Journalists(IFJ) and its Pakistan affiliate Pakistan Federal Union of Journalists(PFUJ) call for urgent government action to force Pakistan’s media companies to pay up to 11 months’ worth of unpaid salaries to journalists amid a crisis which has led to several media workers dying from stress or committing suicide.

The issues of unpaid salaries for Pakistan’s media were a key focus of a five-day mission to Pakistan by IFJ Deputy General Secretary, Jeremy Dear, organised by the PFUJ and its affiliated unions in Karachi, Punjab and Sheikhupura from February 18-22.

In meetings with provincial government ministers, regional governors, editors, media companies and journalists’ union representatives from more than 20 cities, the IFJ echoed PFUJ demands for urgent action to resolve the pay crisis and instigate urgent action to halt thousands of ‘unlawful’ job cuts that are decimating the country’s media workforce. The IFJ also drew its attention to the shrinking space for independent media and the ongoing climate of impunity in the country during the mission.

Ministers in both Sindh and Punjab provinces, in response to IFJ and PFUJ lobbying during the mission, agreed to either table legislation or create a mechanism to force media employers to pay outstanding salaries and medical payments to thousands of affected journalists. In some companies, journalists have received no pay for up to 11 months, while the majority of journalists are owed between three to six months’ pay.

As a result of stress of not being able to meet bills, rent or pay school fees several journalists have died in the country in the past year, with one, Nafeez Ahmed, even calling his employer from his hospital bed, begging for his salary and medical support payments.

The IFJ was told how journalists in Pakistan are facing widespread job cuts, many carried out unlawfully and with scarce few media workers receiving any compensation. Radio and TV stations and newspapers have closed on a whim. Thousands of journalists’ salaries have been cut, some by as much as 60%, with media heads claiming cuts in government advertising budgets and the economic crisis affecting the country have significantly reduced their revenues. As a result, an increasing number of media workers are being forced on to third party contracts and kept working without rights, a situation which the PFUJ claims to be unlawful under Pakistan’s labour laws.

In meetings with the delegation, Punjab Information Minister Fayyaz-ul-Hassan Chohan pledged that government advertising (which accounts for up to 80% of revenues for some media) will, in future, only be available to those who have fully paid outstanding salaries and met their legal duty to employees. The Punjab provincial government also pledged to extend a subsidized housing scheme and provide health cards for journalists in the province to help alleviate poverty, a move welcomed by the Punjab Union of Journalists.

Sindh Government spokesperson, Murtaza Wahab, met with the delegation and agreed to table a new media law, enshrining the professional and economic rights of journalists and offered to work with PFUJ and other stakeholders to urgently draft legislation. He committed that government advertising would not be paid to media owing outstanding salaries.

Punjab’s governor, Chaudhry Mohammad Sarwar, committed to raise the issue directly with Pakistani Prime Minister, Imran Khan, to resolve the issue for journalists across the country.

The IFJ-PFUJ delegation issued a strong call for action to address the crisis of media freedom in Pakistan where journalists have faced killings, arbitrary arrests, censorship, unlawful surveillance and where a number of journalists and their homes have been physically attacked by state and non-state actors. In meetings with senior police officials and politicians the delegation reinforced strong calls for concrete action to protect the lives of journalists and address impunity, including action on the killing of Aziz Memomn, who was brutally murdered before being dumped in an irrigation canal in February.

The delegation reinforced calls for the country’s new social media law to be withdrawn or amended. During the mission, Pakistan’s Federal Government announced a review of the law in response to the criticism and the PFUJ is designated to appear among stakeholders consulted on the proposals. In meetings with newspaper editors and in conferences with journalists’ unions in Karachi and Lahore, the IFJ criticised use of defamation, cyber-crime and anti-terror laws to target journalists, while journalists staged a demonstration outside the Lahore Press Club calling for an end to gagging of the media in the country.

PFUJ president, GM Jamali, and secretary general, Rana Muhammad Azeem, jointly said: “Working journalists are under immense stress due to job insecurity, irregular salaries and threats from different quarters just for their ethical job to bring truth before the common people. This has not only made the environment for journalism unsafe and difficult but is tantamount to a severe threat to liberty of speech and expression of the working journalists”.

IFJ Deputy General Secretary Jeremy Dear said: “It was an honour to stand alongside such brave and resolute journalists and express the solidarity of the international journalists’ community for their struggle for the most basic rights – pay, jobs and rights. In dozens of meetings we have reinforced the message and demanded action from provincial and national authorities to force media to pay up, to stop companies breaking the law and to stop the attacks on journalists and journalism.

“We have made it clear that unless there is urgent action to address the crisis, we will put the case of Pakistani journalists before the UN and ILO and will mobilise affiliates across the world to demand justice for those killed, jailed, sacked, those denied their rights and those owed their wages”.