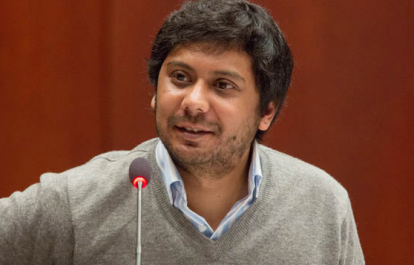 The International Federation of Journalists (IFJ) joins its affiliate, the Pakistan Federal Union of Journalists (PFUJ) in condemning the travel ban of a prominent senior journalist. The IFJ demands the ban be immediately lifted, and that freedom of movement is guaranteed for all media workers in Pakistan.

On Tuesday October 11, Cyril Almeida, journalist for the English-language newspaper, Dawn, was informed that he had been placed on Pakistan’s Exit Control List (ECL), which bars select individuals from leaving the country. Almeida was booked on a Tuesday flight to Dubai for a family holiday, but was told he should not go to the airport as he would not be allowed to board the plane.

The ban was in response to a controversial story penned by Almeida and published on the front page of Dawn on Thursday October 6 entitled, “Act against militants or face international isolation, civilians tell military”. The story detailed a showdown between Pakistan’s Prime Minister, Nawaz Sharif, and the director general of the Inter-Services Intelligence Directorate (ISI), Rizan Akhtar, regarding the operation of extremist groups in Pakistan.

According to Almeida, Sharif warned Akhtar that Pakistan must take action against militant groups fighting against India, Jaish-e-Mohammad (JeM), Lashkar-e-Taiba (LeT) and the Haqqani network, if it wanted to avoid ‘international isolation’. India and the United States have repeatedly alleged that these groups receive covert ISI support, and Pakistan has denied such claims.

In a statement, Dawn said: “First, this newspaper considers it a sacred oath to its readers to pursue its reporting fairly, independently and, above all, accurately. That story that has been rejected by the PM office as a fabrication was verified, cross-checked and fact-checked. Second, many at the helm of affairs are aware of the senior officials and participants of the meeting who were contacted by the newspaper for collecting information and more than one source confirmed and verified the details. Therefore the elected government and state institutions should refrain from targeting the messenger and scape-goating the country’s most respected paper in a malicious campaign.”

The PFUJ denounced the ban, saying: “One has no right to put an embargo on a journalist without hearing him… working journalists are equally responsible to follow the norms of the profession to publish stories based on truth and facts.”

The IFJ also calls on the government to investigate the embargo, and outline clear processes to ensure situations like this do not arise in the future.