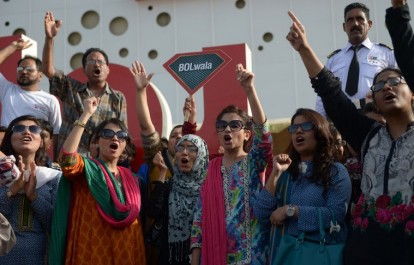 According to reports, more than 1,800 people from BOL Network, who were working on the development of BOL News and BOL Entertainment TV channels have not been paid their wages for over four months. The BOL network is one Pakistan’s newest networks, which ran into controversy earlier this year, after its parent company Axact came under investigation following reports of fraud, which saw the BOL CEO, Shoaib Ahmed Sahikh, arrested.

Following the scandal, on August 19, the ARY TV Chief Operating Officer Salman Iqbal announced they would take over BOL Network and that his first priority was to ensure payment of the employees’ outstanding dues.

On September 16, the Pakistan Electronic Media Regulatory Authority (PEMRA) approved the suspension of BOL News and BOL Entertainment licenses till the fulfillment of legal and code formalities. The Council of Complaints (CoC) of Sindh province had recommended the suspension.

The PFUJ said: “There are some other media organizations, both electronic and print, which are not paying salaries regularly and the staff is in miserable conditions. The PFUJ’s lobbying and meeting with management and authorizes had yielded little results.”

The PFUJ demanded that the federal and provincial governments to hold the outstanding amounts of advertisement of such organizations and arrange to pay the employee journalists.

The IFJ said: “We are seriously concerned by the non-payment of salaries for journalist and media workers in media house across Pakistan, including BOL Network. We urge management and the government to immediately resolve the issue and ensure all outstanding payments are made.”

“Journalist often experience poor working conditions and receive low wages for their work. Withholding wages only works to further compound the issues for journalists across Pakistan” said the IFJ.

Read more about the issues facing BOL on the SAMSN blog here and here.