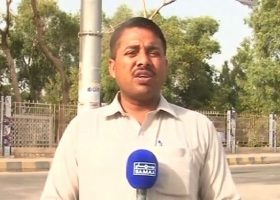 The International Federation of Journalists (IFJ) joins its affiliate the Pakistan Federal Union of Journalists (PFUJ) in expressing serious concerns over the unlawful detention and alleged torture of a television reporter in Sukkur of Sindh Province in Pakistan.

Imdad Phulpoto, the station head of SAMAA TV in Sukkur, was forcibly detained on the morning of 5 January by dozens of police officers without any warrant or legal document before being released later that evening. He said that he was tortured and was taken around the city throughout the day and was neither questioned nor given a reason for his detention.

Imdad had done several stories exposing corrupt practices of the opposition leader in the National Assembly. He reportedly said: “I wasn’t asked anything by the police. They just kept torturing me.”

The PFUJ said: “The PFUJ has taken serious notice of the abduction of Imdad. The abduction of a journalist is an attack on the freedom of speech and free expression of the media. The PFUJ stands in solidarity with Imdad.”

The IFJ said: “The IFJ is seriously concerned by the Pakistani police detaining a journalist without a warrant or a valid reason and reports of his torture. Such an act not only undermines press freedom, but also weakens independent journalism in the country. The IFJ demands that the Pakistan government immediately investigate the unlawful detention and punish those responsible and ensure there is no repetition of such incidents.”