Peace in Rolpa brings a brighter dawn for women 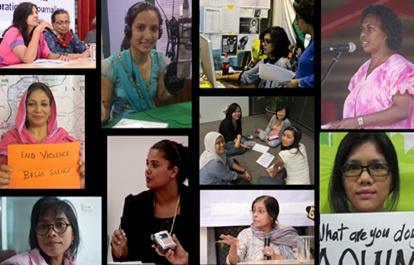 Devi Gurung was just 14 years old when she got married.  Rolpa is a district known for being among the lowest placed on the Human Development Index and when her family decided she should get married in the seventh grade, this was not considered unusual.

Like marriage, pregnancy was also not of her choice. Things got more complex when, at the age of 16, she gave birth to a baby girl. That was during the time when the Maoist insurgency was at its peak and Rolpa was the epicentre of the conflict.

But Gurung’s life improved when she encountered Radio Jaljala, the first FM radio station of the district which was established in 2008. After getting an opportunity for training, she pursued a career in media.

While she started work as a volunteer, today 27-year-old Gurung is an associate editor in Radio Jaljala, stationed at Liwang, the district headquarters of Rolpa. While her husband is in Malaysia as a migrant worker, she attempts to maintain a balance between her family and her career.

Gurung resumed her education after the birth of her baby and is currently pursuing a degree in Liwang, majoring in Nepali and sociology. Even though her daughter is only in the sixth grade now, Gurung dreams of helping her becoming an educated and empowered woman.

The participation of Maoists in the peace process in 2006 brought a brighter dawn for women journalists in Rolpa.  It also made the establishment of radio and print media possible.

Although a few local, weekly newspapers existed during the insurgency, they tended to focus on promoting the activities of the Maoists.  According to Manisha Shreshta, the news editor of Radio Jaljala, the peace process opened the door for credible journalism in the area for the first time.

The latest statistics of the Rolpa chapter of the Federation of Nepali Journalists (FNJ) show a total of 28 women journalists from the district have joined the FNJ and other journalists’ unions.

“The number is really encouraging,” says Ishwari GM, Secretary of the district’s FNJ chapter. “While there were almost no women journalists during the civil war, now women feel safe to travel around the district for reporting. Some of the women also hold leading positions in the journalists’ union.”

Radio Jaljala’s Shreshta is the only woman journalist of the district to have got an opening in the national media: she is currently the Rolpa correspondent for ABC Television, one of the country’s leading Nepali language channels. However, another journalist, Kavita Upadhyay, has moved to Rolpa from her home district of Dang in pursuit of a journalism career.

According to Gurung, newspapers and local FMs provide a fair amount of space for issues concerning women. The leading national weekly newspaper of the district, Sunstar, where she holds the additional position of associate editor, provides a full page for women’s issues, where topics relating to gender-based violence, child marriage, girls’ education, reproductive health issues, and so on, are  explored.

Men staffers at FM stations ensure that their women colleagues do not have to work late hours since the way home is unsafe at night. Radio Rolpa, Radio Jaljala and Radio Holy Reaction are the three FM stations in the district. Asha Magar and Uma KC are among the active journalists of Radio Rolpa.

The women journalists of Rolpa have a complaint about the organisers of media/journalism training programmes, asking why they are held only in the capital city, Kathmandu. According to them, they get few opportunities for skill development, with trainers from Kathmandu reaching them only once in a long while.

“Although we undergo district-based training on a rotation basis, we hardly have access to training by the bigger organisations from Kathmandu,” says Shreshta, who has a small baby. According to her, since most women working in the media have small children, training opportunities that would allow them to bring children along would help them develop their skills and outreach.

With regard to the implementation of the law relating to minimum daily wages for journalists and the access of women journalists to such wages, they point out that, unlike the financially weak print media, the radio sector provides minimum wages, enabling its workers to become self-sufficient.”

Although Gurung believes they deserve twice the salary they currently receive, she is also conscious of the precarious finances of media houses across the country and believes she cannot depend solely on her earning as a journalist in the future.

“Radio is doing well at the moment but, going by the situation of several media houses even in Kathmandu, it would be wrong to conclude that it will thrive here in the longer term,” she said.

Nevertheless, journalism has so far provided her with unprecedented opportunities to script her own career path.

Through A Female Lens is from a series of stories that the International Federation of Journalists Asia-Pacific released as a special report for the 2015 International Women’s Day. Click Here to read more endearing tales.