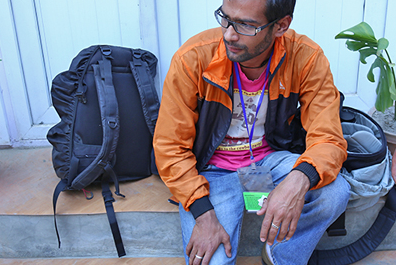 The International Federation of Journalists (IFJ) joins its affiliate the Federation of Nepali Journalists (FNJ) in condemning the attack on a photojournalist by local police in Kathmandu on April 10. The IFJ demands immediate action against the police personnel involved in the attack and safe environment to report for all journalists.

Kabin Adhikari, a photojournalist with online news outlet onlinekhabar.com, was physically attacked by police as he photographed the arrest of protesters inside the government’s main administrative premises, the Singha Durbar, on April 10. Adhikari was sent to cover the protests, which were organized by a civil employees’ trade union. During the protests four people were arrested by police.

Police grabbed Adhikari around the neck and was beaten with boots and lathis (a heavy iron-bound bamboo stick) for documenting the arrests. He sustained minor injuries and had to seek treatment at a local hospital.

Ujir Magar, the FNJ general secretary, said in a statement: “The attack on a journalist who was performing his duty of informing the public about events is an attack on press freedom.”

Photojournalists’ Club, an FNJ associate member organization, termed the incident an attack on democracy and rule of law. Bikash Karki, in a statement, said: “The incident of attack by the security agency despite the journalist showing his identity card and camera showed how safe the journalists are in the tightly secured premises. We urge the government and all agencies to respect journalism and its role in democracy.”

The IFJ said: “The IFJ condemns the attack on Adhikari, who was simply doing his job. The fact that the attack occurred inside security-sensitive premises housing many ministries indicates that Nepal’s security agencies are not committed to protect journalists and respect rule of law. We urge the Nepal government to take action against those responsible for the attack and ensure that such incidents are not further repeated.”