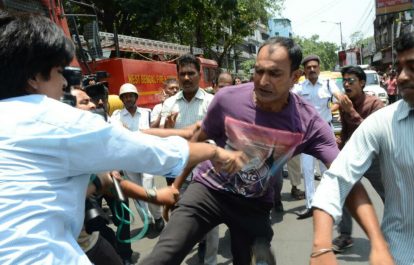 The International Federation of Journalists (IFJ) strongly crticises the attack on several media workers during a fire in Kolkata, West Bengal, India on May 16. The IFJ demands investigation and action against those responsible.

Four media workers including, Sukanta Mukherjee, a reporter with ETV News, Subhojyoti Kanjilal and Biplab Bhattacharya, photographers with Times of India, Samira Biswas, a cameraperson with ETV News and Samir, a cameraperson with 24 Ghanta News Channel were injured during the scuffle, while five cameras were also damaged. Local journalists protested the incident and called on the Chief Minister of West Bengal and the Kolkata Police to take action, but none has happened thus far.

The IFJ said: “We strongly crticise the attack on media workers in Kolkata who were simply performing their duties behind the police cordon. The failure of local police to stop the attack raises grave concerns for the safety of journalists in West Bengal. This hostility towards journalists is not confined to West Bengal and is becoming a growing issue across India. We join our colleagues in West Bengal is demanding immediate action from the Chief Minister and the local police.”