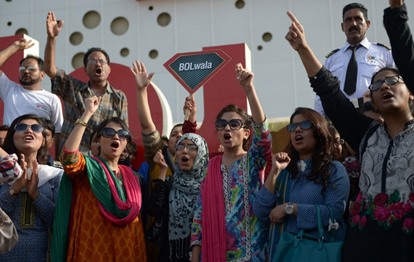 Two incidents — one involving a media office in Islamabad and the other a seasoned journalist in Peshawar — in the span of little over a month, earlier this year, offered a glimpse into where the media and its practitioners stand today on the freedom of the press in Pakistan. The bureau of leading private news channel was bombed for allegedly “serving the ISPR”, while the counterterrorism department’s sleuths treated BBC journalist Riffatullah Orakzai as a “prime suspect” for a telephone call he “received from (alleged) architect” of the attack on Bacha Khan University in the Charsadda district of Khyber-Pakhtunkhwa.

Both incidents have different backgrounds. If you read the pamphlet left after the attack on the TV channel’s bureau in Islamabad — the city in this country that is the most under-surveillance in terms of the vast CCTV network installed last year — the charge-sheet against the channel is that it is allegedly “covering up” when it comes to the coverage of the army versus the Taliban or insurgents in Balochistan.

While there may be various reasons behind this shrinking space for editorial independence, the fact of the matter is that the media is subjected to ever-increasing pressure to report a narrow spectrum of controlled news rather than being allowed to use its own editorial judgment to keep the nation informed. On our side (read the media), with ethical journalism slipping through our pens and microphones, it provides others with a lame excuse to crack down on us.

A report by global media rights group Reporters Without Borders ranked Pakistan among the “freest media” in Asia in reporting “political squabbles”. This provides a new impetus to debate the state of press freedom in Pakistan, on the World Press Freedom Day being observed today. In the same report, Pakistan’s ranking in the Global Press Freedom Index also improved, occupying the 147th position out of 180 countries — a 12-place gain from 2015.

Independent journalism in Pakistan is possible if a political corruption story is dug out. Articles and talk shows discussing political squabbles do not land journalists in troubled waters. However, reporting on the Taliban and other militant groups, the law enforcement authorities, Fata, Balochistan, foreign policy and religion, can land you in hot waters. Critical articles, fishing in troubled waters, are carried by English-language dailies, weeklies and monthlies. However, they are often not reproduced in sister publications in Urdu-language dailies, weeklies and monthlies so as to steer clear of any attacks, intimidation, harassment, likely abduction or kidnapping.

Free movement in areas where conflict or military operations may be ongoing is out of the question. Even though they are declared ‘secured areas’, prior permission is required for a journalist to visit South or North Waziristan, even for a soft story. Meanwhile, ‘embedded’ journalism is promoted at the cost of independent journalism. Today, Fata and Balochistan are out of the news if one looks for independently-sourced information. The government of Dr Abdul Malik Baloch had appeared as a hope when its media-friendly attitude made many believe he would stop the situation from plunging further into chaos for journalists in Balochistan. However, with the new chief minister in Quetta, our dreams remain a distant reality. Putting a journalist in the “Fourth Schedule” of the “list of suspects”, making attendance at a police station in the Dalbandin district mandatory for him, have brought about fresh misery for journalists there.

The issue of press freedom took a backseat in the post-9/11 world and the increased influence of security establishments struck a blow to all previous gains made to uphold press freedom. Whatever press freedom Pakistan has today is all set to be taken away as the government of Prime Minister Nawaz Sharif has paid no attention to objections over the Pakistan Electronics Crimes Bill, which has the potential of taking journalism out of Pakistan if the upper house of parliament follows in the footsteps of the lower house, which passed the controversial piece of legislation weeks ago.

I will end this op-ed on the following note: the political leadership’s support for a free media will be measured by all the four provincial governments’ commitment to passing journalists’ protection laws as soon as possible, as we commemorate World Press Freedom Day today.

Originally published in The Express Tribune, May 3rd, 2016.